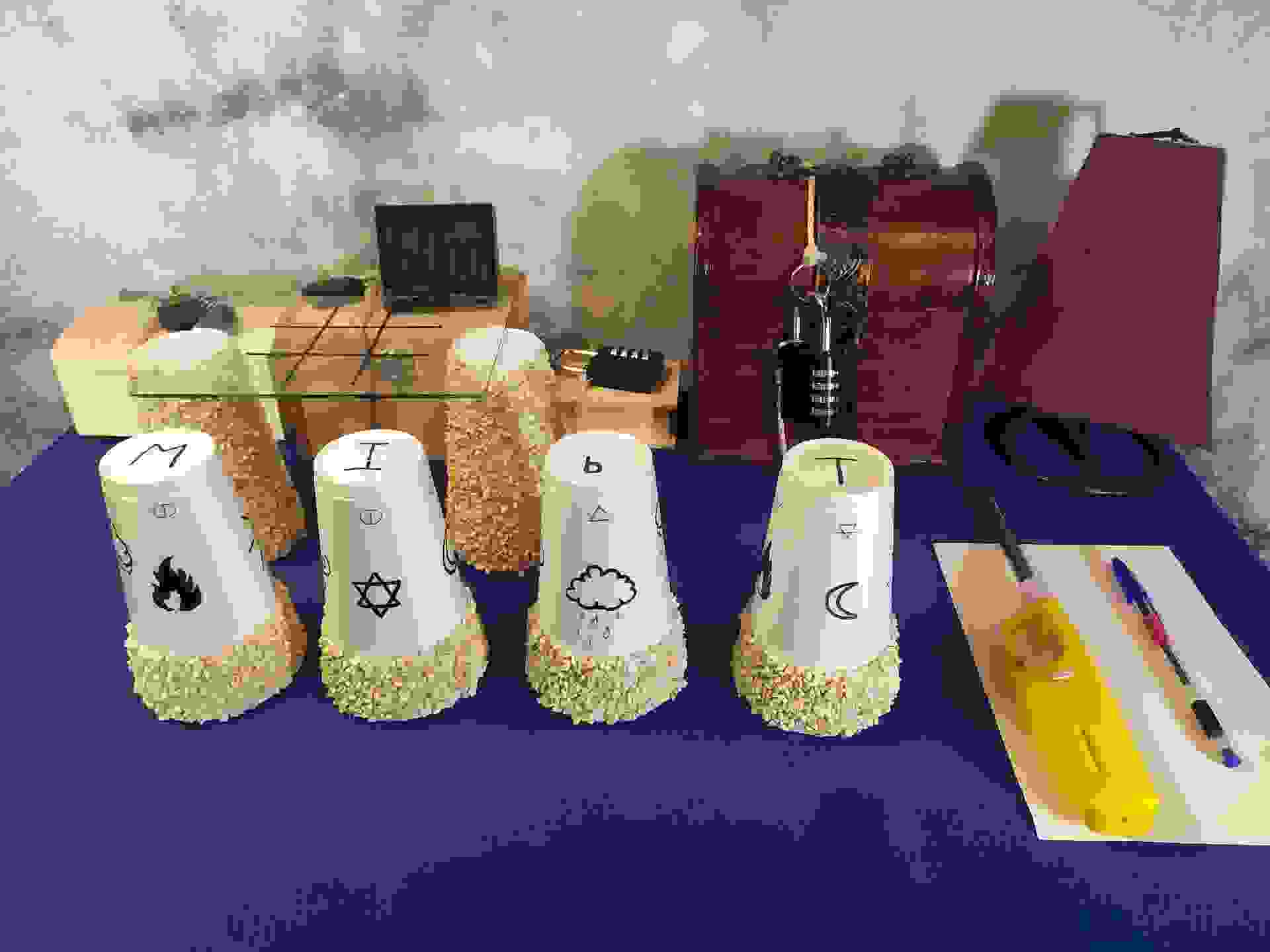 6/10Let’s be honest here, the ‘set’ was non-existent and the props had a distinctly homemade feel to them – as far as immersion goes, this game isn’t fooling anyone. However, I find myself rating it quite highly considering as the surface-level aesthetics melted away once we got stuck into the game. What definitely helped was that the game is broken into stages, what we’d call linear in a standard physical game. This offered the games master an opportunity to progress the story with our full, undivided attention. These little interludes were quite evocative, with some on-theme voiceovers and a suitably mystical soundscape. By the time we reached the end, it was easy to forget that we were playing a game that was on a tabletop with a handful of props.

4/10This is a live online escape room where you control a real person with real objects, it’s not just a self-play digital game. It makes use of Google Hangouts and Google Drive to share video, audio and files. The whole ‘room’ is set on a single tabletop. This keeps it simple as you don’t have to ask your host to move around the room or look in drawers etc. Despite only a small area needing to be themed, it’s pretty basic with just a cloudy backdrop, the puzzles and the files you receive adding to the ambience. Some props looked really cheap like the polystyrene cups, but as you aren’t there, it doesn’t really matter so long as they work, which they did. Our aim was to complete the puzzles to win the alchemist’s elixir, a sip of which would extend our lives and cure any sicknesses.

8/10The puzzles really worked for me. They were obviously limited given that this was a live-streamed game but somehow they still managed to incorporate most styles of puzzle, excepting the oft-frustrating skill games. There was an incredibly clear logic to the challenges leading to plenty of rewarding ‘a-ha’ moments. I still find myself laughing at one point where we managed to find a convoluted route to solving a task when there was very clear signposting right in front of us, falling into our usual trap of overthinking things! There wasn’t any part of the game that I found to be too difficult and the times where we faltered, it was definitely on us.

8/10This is more simplistic than the average escape room with just 4 puzzles, but they are multifaceted with multiple steps needed to solve each one. They’re logic based, need to be solved in order and have no repetition. It took us ages to solve the first two and we needed clues to help us. But we then got into our groove and completed the last two without too much difficulty. However we did manage to solve one of them with an alternative method that our host had never seen before! The puzzles were the right level of challenging and I really enjoyed solving them. Nice touches were being offered 3 levels of difficulty to decide how many clues we’d get, and whether to show a countdown clock or not.

9/10I enjoyed the hell out of this one! YouEscape has found a way to distill the full live gaming experience into a compact, live-streamed event. I was initially incredibly sceptical but it honestly works. After five minutes, I’d forgotten that none of us were playing in the same space, everything worked effortlessly. And I think the simplicity works in the game’s favour. This was perfectly pitched, as elaborate as it could be without having too much to keep track of which would be onerous when you can’t physically interact with objects. Get your usual team together and give it a go!

8/10The main downsides of YouEscape over a normal escape room are the lack of hands-on interaction and missing out on the joy of the exploration. However this allowed us to fully focus on the fantastic puzzles instead. Our host explained things well and went along with every suggestion of ours, even the ones he knew were wrong. 4 puzzles on a table sounds very simplistic, but it worked really well and I thoroughly enjoyed Magnum Opus. The game requires a computer with a microphone and a reliable internet connection, but webcam is optional. You’ll also need some tech skills as you have to flit between multiple browser tabs, and copy and paste information between them using keyboard shortcuts.

9/10This game is cheaper than most being $30 per team (the route to playing is via YouEscape’s Patreon page) and they add a new game every month. Splitting this between 4 players would make it $7.50 a month per game which is fantastic value given the quality of the game (the one that we played anyway!). I wholeheartedly recommend giving this one a go, it’s not as strange of an experience as it sounds!

9/10The drawbacks of an online escape room are countered with the ability to play with far away friends, to play if you aren’t physically able to visit a room, or most importantly right now, to play during the Coronavirus lockdown when you can’t leave the house. YouEscape hasn’t been hastily created for the current situation, its been running for around 2 years, being honed during this time. The theming and budget may not be high, but the gameplay hasn’t been compromised. The low price point factors this in, although using Patreon complicates it a bit. You pay $30 monthly for a new ‘room’ each month, but can cancel afterwards for a one-off game. This is the perfect antidote for bored puzzle fans who are stuck at home.