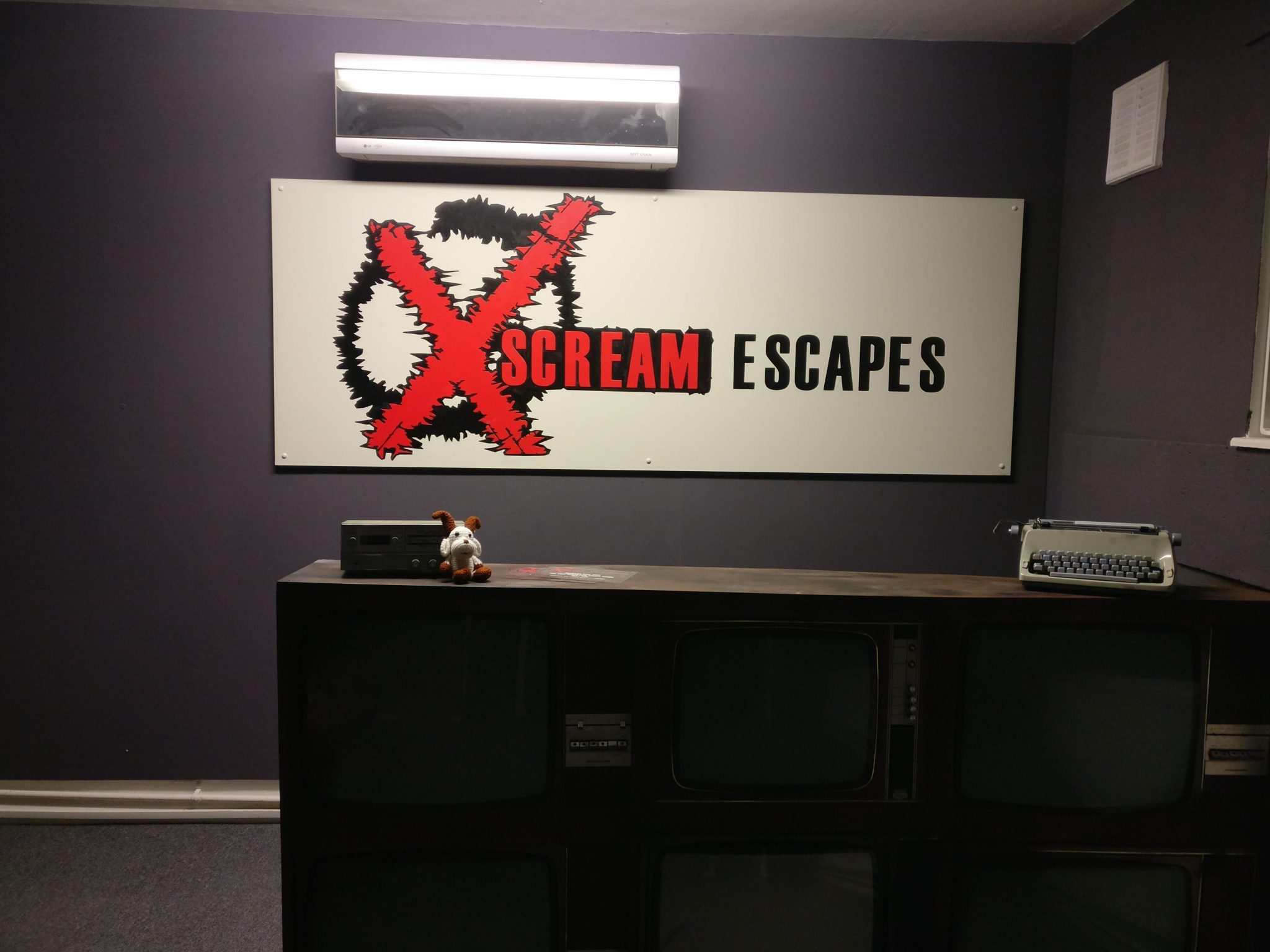 7/10The place feels real – Xscream Escapes have plumped for that hyper-realistic style of theming, reminiscent of Escapologic games. So it depends on how you feel about a space actually feeling grimy as opposed to just looking it! Overall, it works although I think it’s slightly let down by the clue system, the classic TV screen. More and more we’re seeing companies adopt on-theme ways of delivering clues and I think that’d go a long way in maintaining the immersion. The puzzles also mostly made sense in the world of the story, something I like to see!

8/10We entered Annie’s bedroom in the asylum where we received our video briefing. As always with briefings in the room, it is hard to focus on the story as you can’t help but look for clues before the start. Once the briefing was complete our journey started. The bedroom was in a dire state which fitted the theme very well. I liked the addition of the bathroom appliances. There was also a good use of music in this room which added to the drama. Once we got through to the second section, we entered a large recreation room which was an expanse of space with a lot of seating and quiet areas for the patients. This was a well thought out room. Our last section to help us escape was in the asylum’s control room. This was a more technical room but again kept on the theme to the escape. The only thing I felt this room was missing was an epic ending. Whilst this game was yet another room it seemed a lot more interesting than others I’ve visited.

6/10Despite the XScream name, don’t expect any screams as this isn’t a scary room. There is just a mild horror vibe to the storyline. There are multiple rooms with the one you enter being the most interesting with its abandoned feel. One of the rooms was a bit disappointing as it was just a large area with some tables and chairs and not a lot else, so didn’t excite. Clues are delivered the traditional way by text appearing on a TV screen.

9/10One thing I noticed about this room was how realistic the set was. Once inside, you definitely felt immersed. There was a story, which you felt part of, as you worked out your escape. The music in the background added to the tenseness. One thing of note is that the ending seemed lacking, there was no big finale. I think this is an area the hosts should work on to provide a stronger ending. 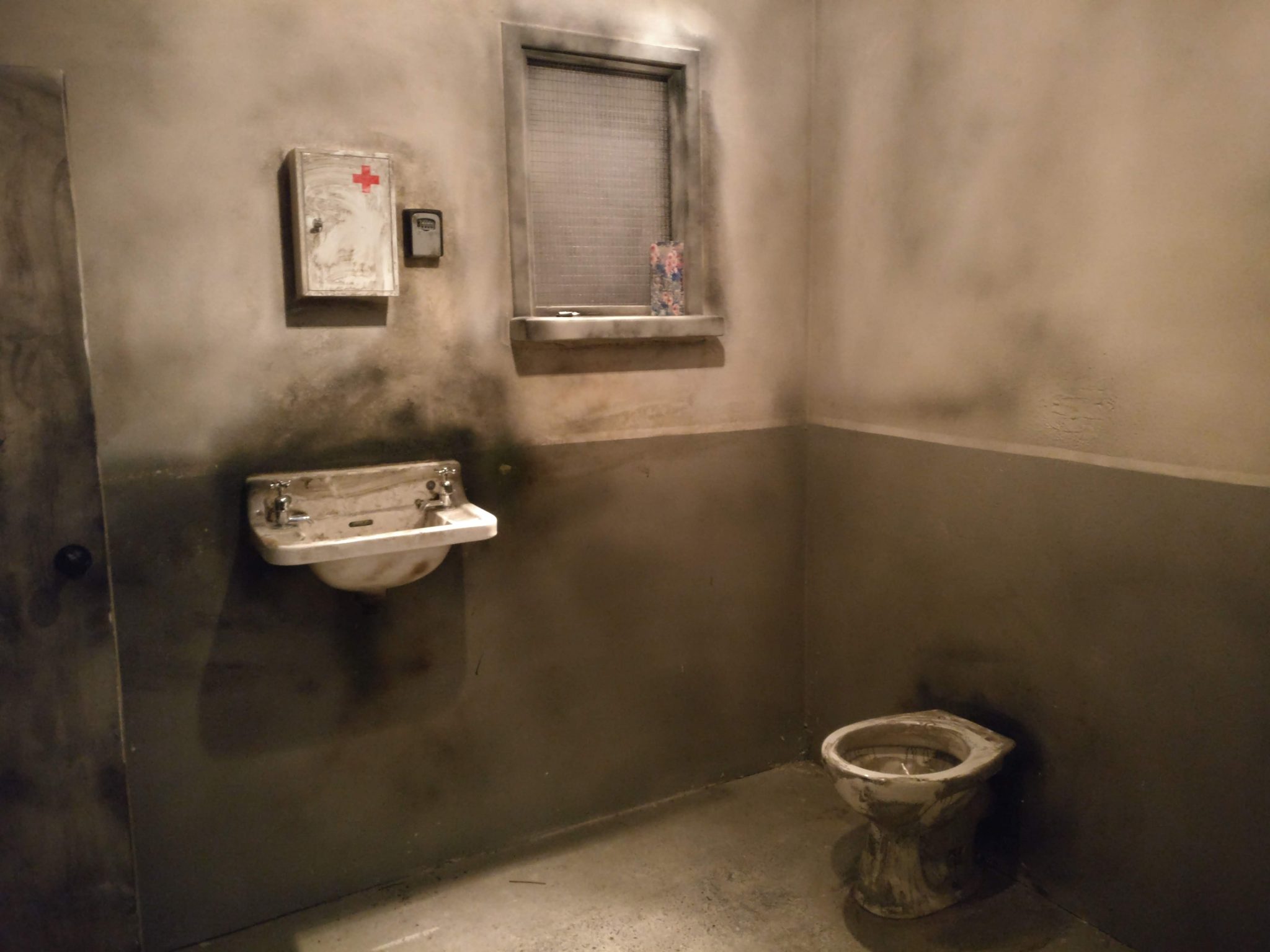 7/10They were all fair, logical and made sense in the game’s story. Whilst I don’t mind reading notes, there seemed to be a lot that were superfluous to the game but essential to the narrative. I think you need both but maybe a better balance should be struck as it was easy to get lost in a lot of detail that was essentially red herring (but story stuff so not exactly!). There was also one puzzle later on that didn’t provide feedback, consequently causing us to attempt other solutions until we were informed that we had indeed completed it.

8/10I really enjoyed the puzzles in this game. Even though there was the traditional padlocks, this game also had a few automated games. There’s a lot of searching and reading in this room. I liked the reading elements as this helped keep the link to the theme and helped you understand what Annie had gone through in the Asylum. Whilst none of the games were particularly difficult, the tasks were logical and involved teamwork. There was more than enough for a team of four to do without treading on each other’s toes or getting bored. I particularly loved one of the hiding places in this room, this was something I’d not seen before and I tip my hat off to the designers!

6/10This game involved an awful lot of reading throughout. As it’s my least favourite escape room task, I try and avoid it where possible. But in this instance, there was no getting away from it! You also need to do a lot of hunting around for objects, one of which was hidden in an unusual place. They made good use of automation with the objects, although there was a lack of feedback upon solving one of the puzzles which meant we didn’t realise we had solved it. They state this room as being 5 out of 5 difficulty but it didn’t feel quite that tough.

7/10I found this to be a clean, logical room, which is padlock heavy. Be ready for a lot of reading and searching. The puzzles were in line with the theming and didn’t seem out of place for the setting of the room. Things were hidden in clever places. The puzzles were not too difficult, but it does depend on your experience level. Some puzzles required you to think outside the box, however some were standard which I have seen before in other rooms. There was an instance when we solved a puzzle and didn’t realise that we had solved it as it wasn’t made clear. 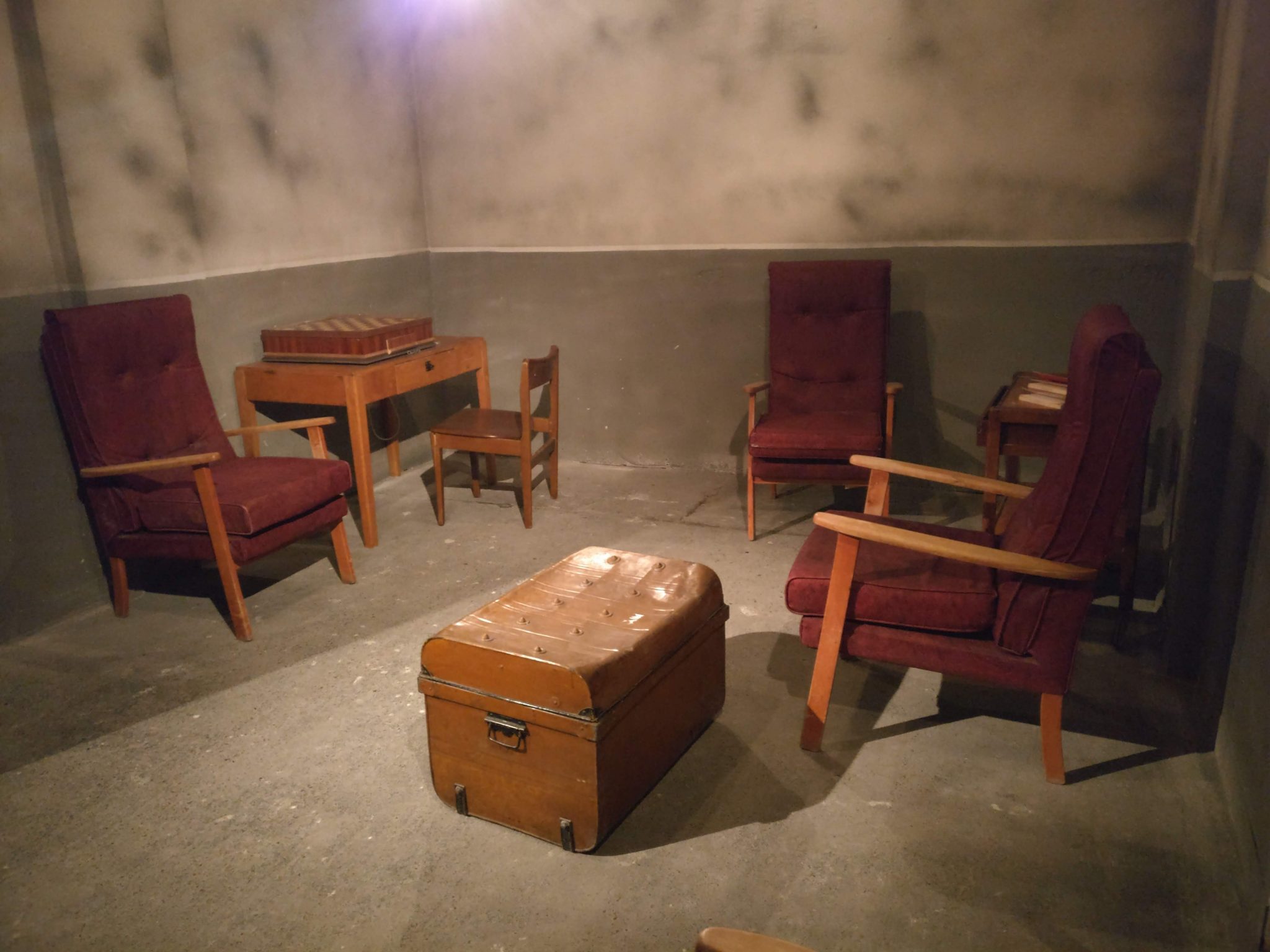 7/10It’s a fun game for sure. Maybe not as spooky as it could be but I had a good time in there. The game flowed nicely and I appreciated the care that the guys had taken to tell a story here, it often gets overlooked.

9/10Whilst there was no big wow factor to the room and puzzles, I thoroughly enjoyed playing this game. I feel this is due to the strong story element to the game. With the material we were asked to read I felt really immersed into the character of Annie which to me is a USP in an escape room.

6/10As mentioned above, I didn’t enjoy all the reading we had to do. Plus we only had 3 torches between the 4 of us because their other ones broke. Not having a torch each is a peeve of mine as it means some of you are stuck following those that do have one. The intro video dragged on a bit too long and could do with being made shorter. The final negative was there was no proper ending so we didn’t realise we’d completed the game until the hosts opened the door and came in. Despite these issues, this is still a solid room, albeit not particularly unique. But that’s only an issue if you’ve played many rooms before.

7/10In terms of fun, I enjoyed how the story progressed as you got to find out more about Annie. The puzzles didn’t wow me, but were just enough to keep me engaged. 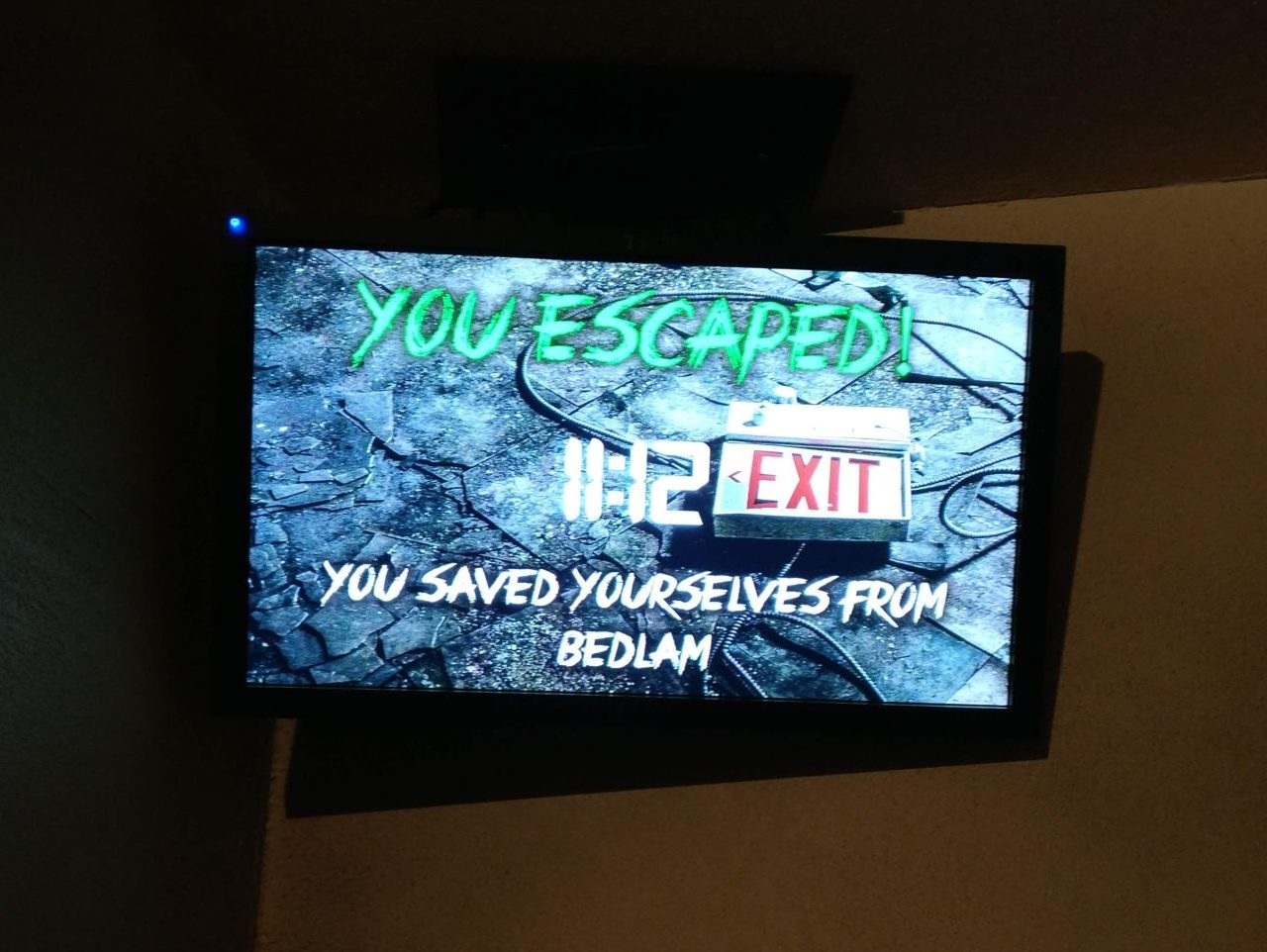 7/10It’s worth a go for sure. The location, admittedly, is slightly tricky especially for myself using public transport! But the guys behind the game are clearly passionate and have produced something Escapologic-esque – just needs a little more atmospherics!

8/10This room is very reasonable for a game just outside London. If travelling there, it may be easier for most to drive as it’s not walkable from the train station. The GM’s were very friendly and they had a large waiting area where we were offered complimentary water. This game is certainly worth the trip to play.

7/10This room is very reasonably priced. Our fun and friendly hosts offered us free bottles of water upon arrival which is always a nice touch. They were the owners and revealed this was their first attempt at an escape room and it’s only been open for a few weeks and they’re looking to iron out any issues. Therefore I’m sure they’ll be using our feedback here, as well as the general public’s, to improve Bedlam and hopefully resolve my issues above.

7/10You can tell that the hosts have taken care in this room to ensure you have a full experience. A better ending and maybe some skill games could make this a great room.