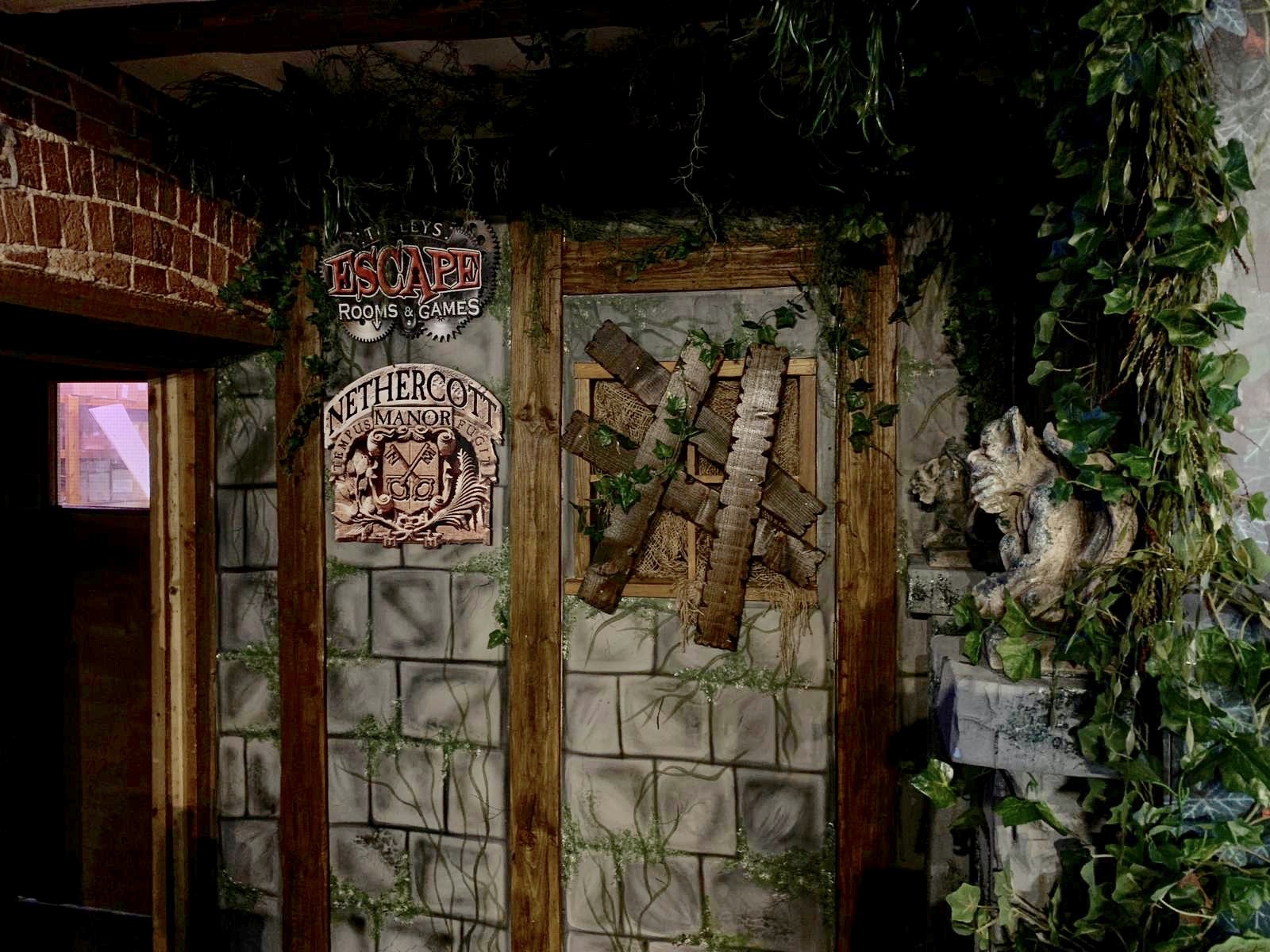 8/10This was an expansive set, beginning outside the mansion with our first task being to find a way in. This ‘outdoor’ section helped set the scene and was a cool way to start the game. Inside, the main area is as you’d expect from the theme; bookcases, portraits and grandfather clocks. As you progress, things get more interesting! More than the ‘surprises’, the space was just polished to a very high degree. It didn’t at all feel flimsy or dressed.

8/10Due to the difficulty of this game and only having 3 players, we only just reached the half way stage of the experience. That being said the rooms of the manor we encountered were all wonderfully dressed and had the right element of distress for an old house. There was also nice little touches of ‘scare factor’ with the use of sound effects, fog smoke and the way the clue system worked.

8/10This escape room is set over a large area. However, the various sections did not feel sparse. The area was used well. Theming was of high quality and seemed realistic. It also followed in line with the story, starting outside, then entering the Manor.

6/10There were two main takeaways for me in this game. Firstly, the difficulty curve seemed ‘off’. It felt to me as though we stormed through the first two areas of the game and then just completely and utterly stalled in the next two. One factor was my second issue, the smell puzzle. These things are always temperamental anyway. And then the staff were very clear afterwards that if you try more than one in quick succession, you can effectively ‘break’ it. Which is exactly what we did! So we got hopelessly stuck with it and stumbled along as a result. Despite those two things, there was a great flow in the first half and a physical activity that seemed as though it was going to be a real pain but turned out to be quite fair. To a large extent, that smell puzzle pretty much derailed the game for us…

6/10We started off this game really strong and solved the first few logical puzzles fairly easy, but once inside the house there were multiple puzzles to complete and I feel we were hindered by the team size. This game required a lot of searching which you’ll know from our other reviews is a struggle of ours. There was a nice mixture of puzzles including a really tricky skill game, however a couple of times we’d solved them but hadn’t realised until prompted. Lastly we were faced with another scent game. I feel these need to go as everyone has a different palate and we wasted so much time on this but couldn’t solve it as all the smells seemed the same after a while. We left this game and went on to others but hit a brick wall as the scent puzzle had to be completed. It’s a shame as we were really enjoying the game but got so stuck on this that even with the numerous hints we were never going to get it. Maybe if we got further my score would be higher but I can only base it on the tasks I played.

7/10The puzzles were fun and diverse, however the room was built for a large group and so needs to be played with a large team to get the full experience. There was a smell game which needs to be improved due to the amount of options and the variation in smells.

7/10I would rate this higher were it not for the total brick wall that the smell task was! Up until that point, we were working through the game at a steady pace with a nice, solid set to explore. It’s a good game with one very polarising feature.

6/10Having only completed half the game, I felt disappointed at not getting any further. Playing as a team of three was definitely too small for the amount of levels there seemed to be. For how far we got, I appreciated the scenery and the ‘scare’ elements however the scented game ruined the experience for me. I do however hope to revisit this game to try and complete it. I’ll just take a friend who is good at smells!

6/10While playing the game, it felt fun and we were getting through reasonably quick. But due to the amount that needed to be done, we just didn’t have the manpower and the fun factor was lost.

6/10There’s one thing that I want to point out here and that’s the way the debriefs are managed at Tulley’s Escape Rooms. If you fail to escape as we did twice, they refuse to show you what was remaining. It strikes me as an odd decision as a) we’re not likely to return just to see what potentially the last ten minutes had in store for us. And b) there doesn’t seem to be a compelling reason not to? Arming us with spoilers maybe? I don’t really get it! But, the negative side of it is I will never know how close we were to getting out and what the remainder of the set looked like. In my experience, no other company is protective of elements that the player hasn’t witnessed in the hour of gameplay. Whilst it’s definitely up to them as to how they run their games, it’s nice to see how far away you were from the end and what potentially cool things the team had in store for players.

7/10For only £25 pp this game is great value. I feel you need at least 5 people to be able to work on multiple puzzles at once so you can get through all the challenges. The theming is really strong, and the scare elements are fun.

7/10The value in this room is through the theming and experience you get. They tried to push jump scares on us and they worked at times.