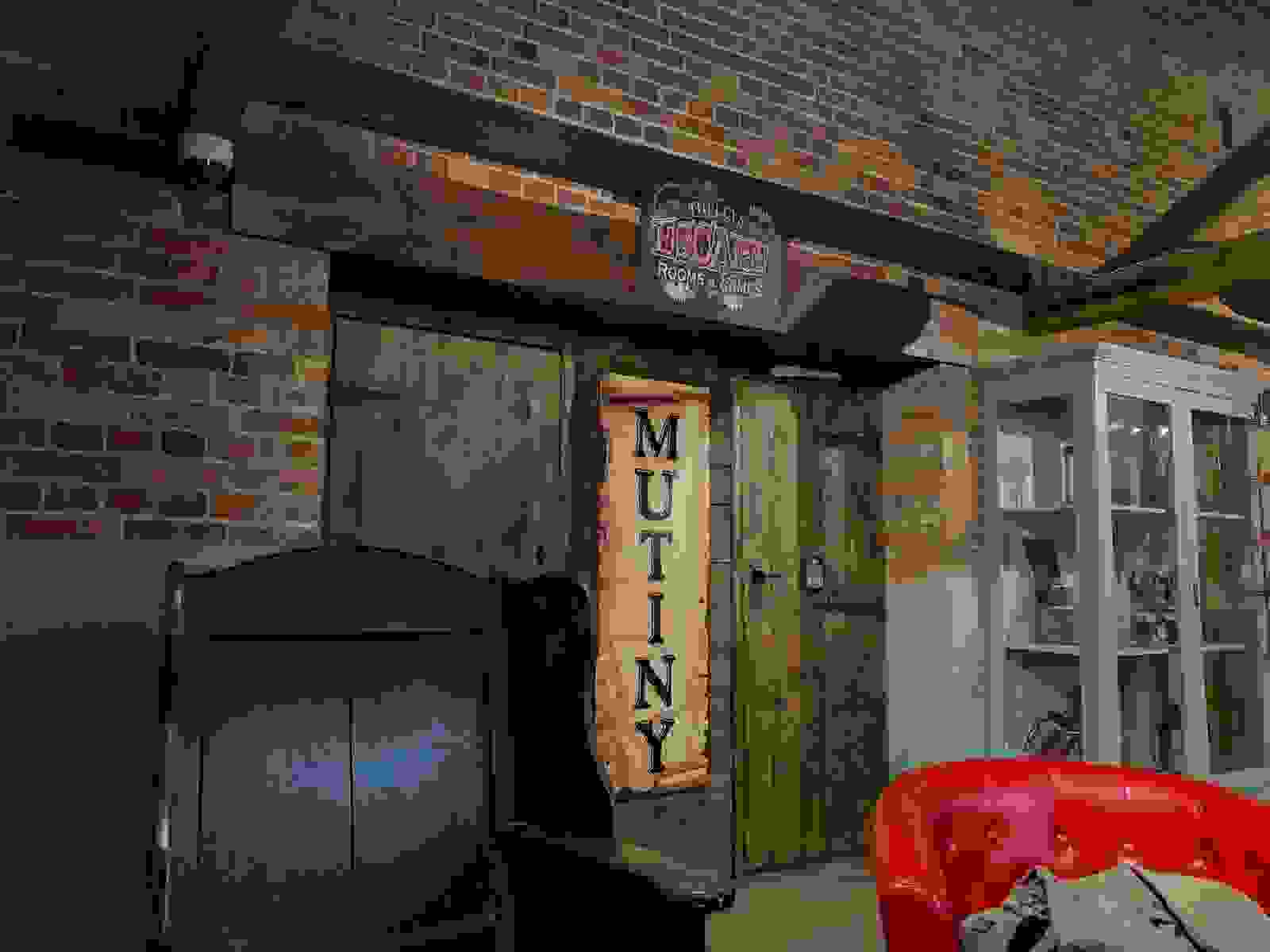 9/10Yeah, this is good! There’s a very nice progression through the different spaces of this game – you start on a ship and eventually work your way off it – each area marks that journey. The area once you’re off the ship is amazing – I’ll ignore the fact that the puzzles in that room didn’t make a lick of sense because it was just such a cool space to spend time in! By far my favourite part of all three Tulleys rooms. For the most part, though, the puzzles actually did fit what we were doing which was a huge plus.

9/10The theming design for this room is epic. There are several sections in this game which are all linked to the mission, but there’s one area in particular that stands out. This section was like walking into a film set. We were genuinely ‘wowed’ by this room, we literally thought we’d left the game and time warped to an island. Whilst the set design was great, I felt some of the tasks we had to do didn’t link to the time era which was why I marked the game down.

9/10The theming is what made this room. It was a large area to explore and you could tell the hosts had put effort into every area of this room to make it as realistic as possible.

8/10I really liked the heavy focus on physical tasks – this room felt like a true adventure! The props were nice and weighty and, of all the Tulleys games, Mutiny felt as though it was perfectly suited to a team of mixed skills – there was something to play to everyone’s strengths. The only downside was that there seemed to be an awful lot to do – we struggled, more with time than complexity.

7/10I feel this game was created by Tulleys for a larger group, as every experience is jam-packed of puzzles that never seem to end. I feel the idea is you are meant to split off into smaller groups to solve all the tasks at hand, although this could spoil your experience as you could miss out on some cool things. The puzzles themselves were all logical and made sense, however, there were times where we knew we could guess the solution but we kept getting warnings to not jump ahead. The other point to note was that there was a physical task involved in this game which really tested our strength due to only playing as a three, and one of our team members had to work really hard controlling their section which was designed for two people.

7/10There was a lot to do in the time permitted. It was definitely built for a larger team. Some tasks needed a minimum of 4 people to work properly. The puzzles were fun to do, with a mixture of skill and logic games which will keep you busy.

8/10For me, interacting with the set and some of the chunky props was by far the biggest selling point of Mutiny. This wasn’t a game where you sat around solving number puzzles – you actually had to get stuck in and play with the environment as you would if you were actually there! Sometimes immersion is more than a pretty set!

8/10I thoroughly enjoyed this game, it was a nice mixture of puzzles, some skill, some mental and some play acting. Whilst we had an issue with some of the locks being difficult to open, it didn’t spoil the experience too much. The main feature of this game is the set design, which is possibly one of the best-themed rooms I’ve played.

7/10As you went through the areas, the set design went up a notch at each stage, this is what made the room enjoyable to play. The puzzles were on point with the theme and they added to the fun factor.

8/10We didn’t get to the end but so what? It was just pure, unbridled fun from start to finish. The sense of adventure coupled with incredible theming makes for a brilliant hour. If you can only do one of the rooms at Tulleys, make it this one.

8/10The set design alone makes this game worth playing. I would, however, advise you play in a bigger group say 4/5 to be able to get through all the tasks. Although I’d throw caution on too big a group as I do feel it could hinder your experience.

8/10This room is all about the experience factor and the theming of the room. This is what gave it a “wow” factor. There was just too much to do in this room however in the time given and with a team of 3, it didn’t give us time to enjoy the puzzles.