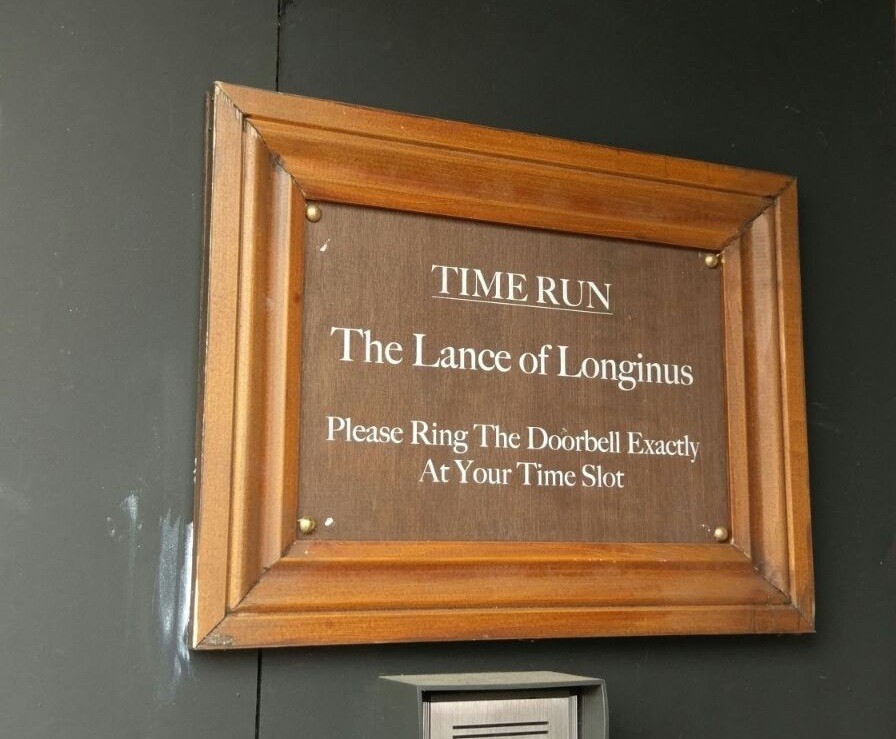 Synopsis:
Dive through a time portal, then voyage through forgotten and undiscovered worlds on a quest for an object of unfathomable power. Run through time, against clock, to track down the Lance of Longinus – before your 60 minutes are up. A deep, exploratory quest across multiple time periods. Track down and safeguard a powerful weapon, lost to history. Become the protagonists in your own, amazing, cinematic adventure.

5/10This one’s a double-edged sword. It is most definitely the most expensive room that we’ve played but it’s also one of the most well designed and immersive games that we’ve ever played. Is it worth the price? I don’t regret paying for it but the higher price doesn’t really buy you an experience that’s worth almost double the price of most other games.

6/10At £42 pp the room is very expensive. The experience is really good but I feel the price could be reduced.

7/10This is the most expensive escape room I’ve seen, but it also has the highest budget and some wow factor which makes up for the extra cost. However it’s still very pricey.

6/10It’s on the higher end of the scale, but I do think it’s value for money with the set production they provide. 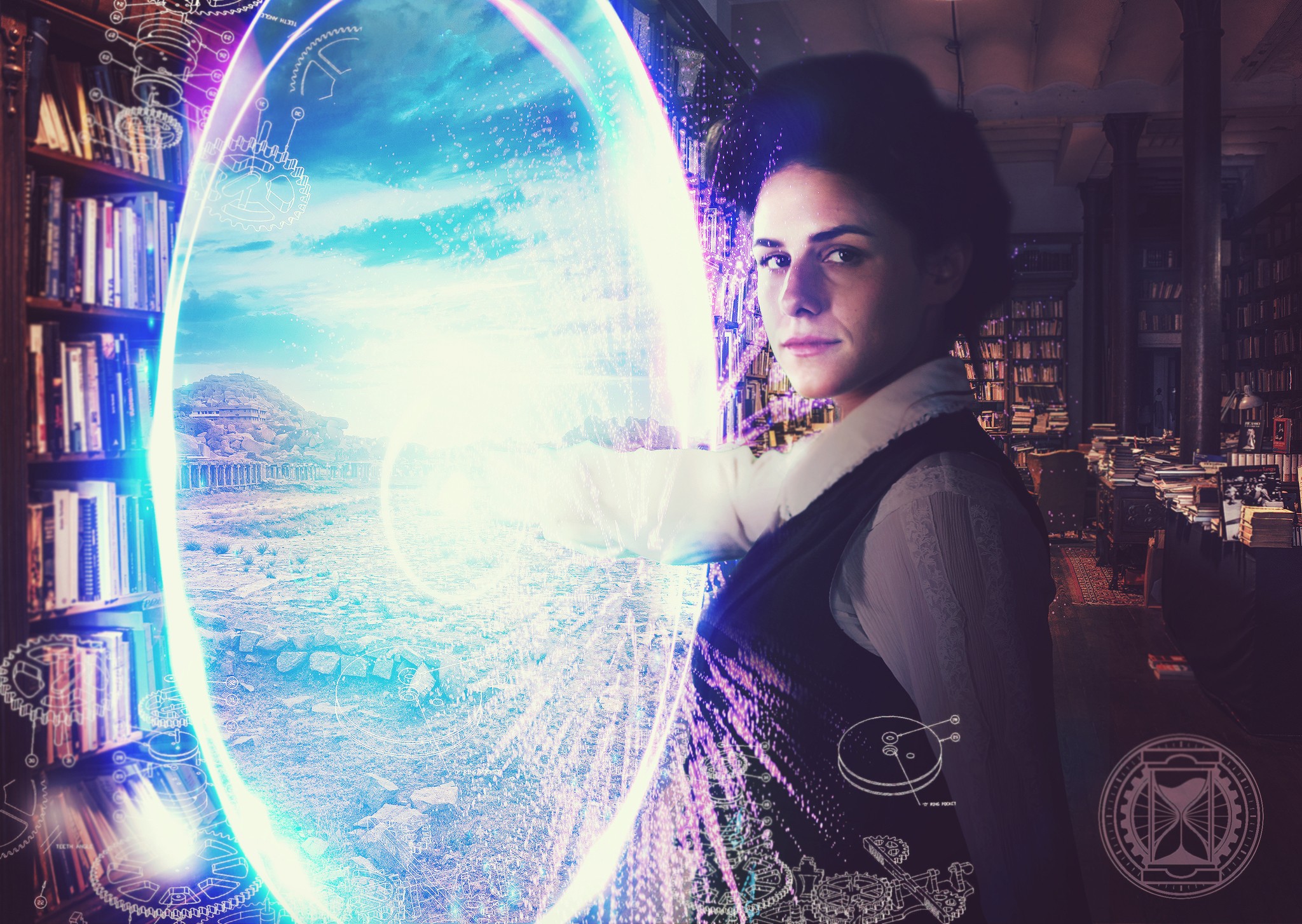 8/10Everything is on-theme here – you have to arrive at precisely your booked time, any earlier and you’ll have to wait. You can see why when you enter, there isn’t a waiting room as such and the team are making a clear effort not to have other players cross paths and shatter the illusion that you are the ‘world’s only hope’. The GM is in character, the clues are delivered from another character (who isn’t physically present in the room with you) and the rooms themselves are well designed. The one downside to the theming is that the finale room is uninspiring.

9/10The theme for this game was excellent, from the moment you step into the reception to the end. Each time period we travelled to mastered the scene we were sent to. Even though some scenes were better than others, I can’t fault the overall effect.

9/10You can tell a lot of money has been spent to make the rooms look top-notch. The games tie in with the respective themes well.

8/10When you first arrive the hosts set the scene well, maybe a bit longer than required. You then get a short video clip where you get to meet Luna Fox, at this point though I was eager to get started. I do like how they try to build on a story. The middle room in my opinion is the best themed with decent production values and connected to the puzzles contained in the room.

7/10It’s a pretty standard game really but everything is delivered with an unrivalled level of polish. This game wants you to feel as though you are travelling through time and it absolutely achieves that.

7/10Whilst I loved this game, nothing is too standout that it warrants the price. There was one part I loved which I hadn’t met before which is why I increased the score.

9/10This is the biggest budget UK escape room I know of, which makes it unique in itself. The fact you get 3 completely different sets within one game (you are time travelling) is really cool, especially as you don’t know what you are going to get next.

6/10I would say there’s nothing too unique in terms of the puzzles. The uniqueness comes from the sets itself. 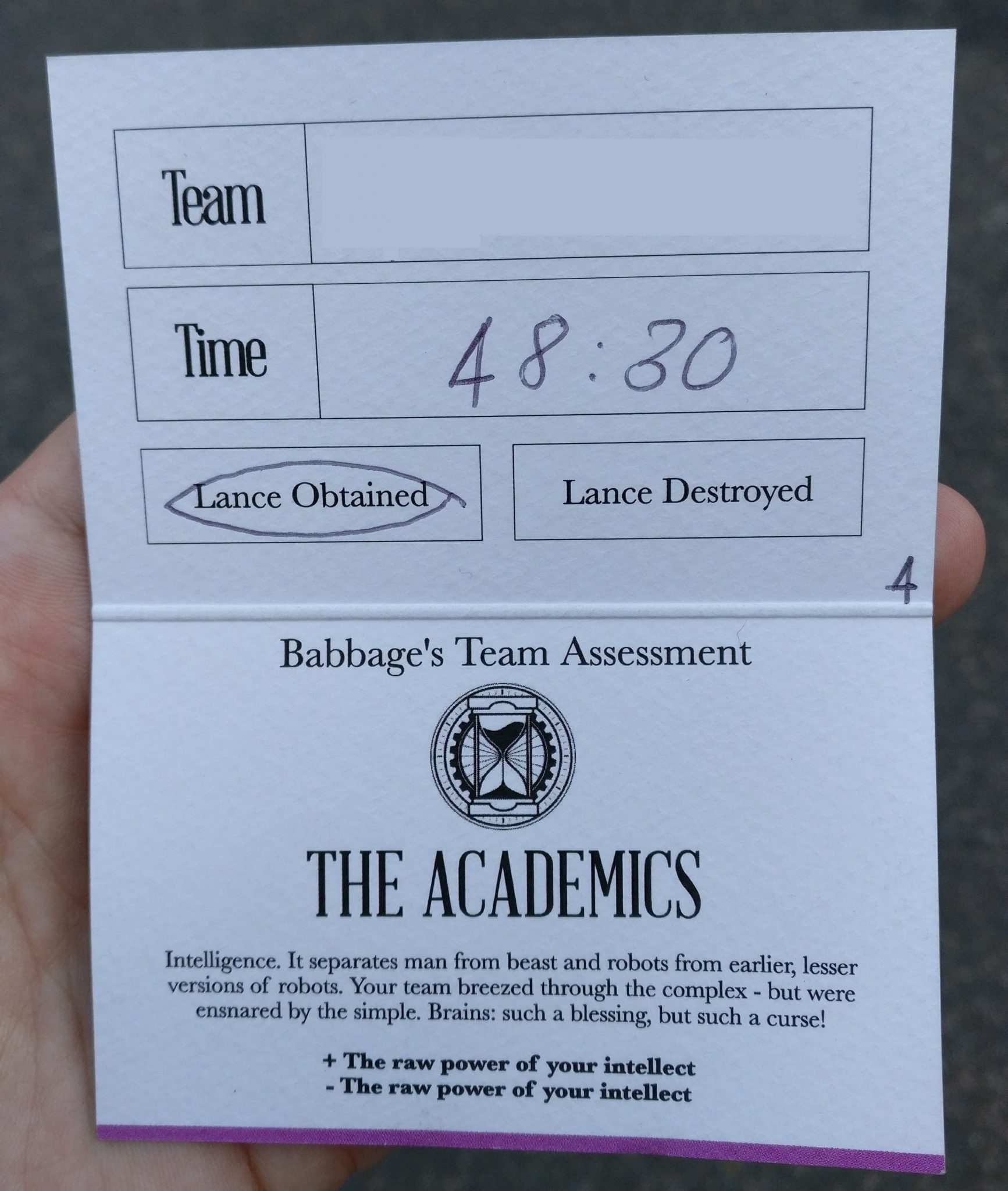 7/10Without spoiling certain elements, all the puzzles felt relevant to the time period you were in – the area that took place in the past relied more on physical actions as there was obviously a deficit of technology in that era. They contributed to making each room feel different, aiding the visuals in creating an immersive atmosphere.

7/10My score is mainly for one sector as I loved the way we had to work as a team on some games. Some puzzles were so hard I’m not sure how you’d solve them without clues. Overall a great set of puzzles but only one ‘wow’ moment for me.

8/10There’s a good selection of both logic and skill games here. Plus some required teamwork which is good. Without giving too much away, I particularly liked the puzzle involving laser beams, which was something different.

7/10There were some fun puzzles in this escape room, especially in the middle room. We got to use lasers which was enjoyable. The room is definitely built with the view in mind for a team. As the escape room is quite non-linear, there are puzzles that you may miss, but you are always kept busy solving something.

The theming and scale of this game is going to be tough to beat! If you want to experience something that truly delivers the ‘wow’ factor, Time Run is your best bet.

The theming was fantastic and I really enjoyed the games in a certain part.

The sets are excellent and it’s exciting wondering where you will time travel to next. Even the start and end lobby are on theme and the acting is very good. I really enjoyed playing here.

What stood out for me was the production value of the middle section and the team effort needed on the puzzles.

The main thing that bugged me in this game was that the final room was a total letdown considering the game up until that point. The order of the rooms should have been better planned as the room in question wasn’t exactly terrible but made for a damper finale than the rest of the game set us up for.

I feel the price is the most negative thing about this room. But it is a great experience and I wouldn’t want to turn people off.

The last room is an anticlimax with by far the least exciting theme. Also, one of the puzzles required a bit of brute force which shouldn’t be needed, so they had to prompt us because we thought we were doing something wrong and didn’t want to risk breaking the set.

The last section of this room did not provide the wow finish that I wanted.