The Adventure is Real: Episode 1: The Hunter of Sleep review 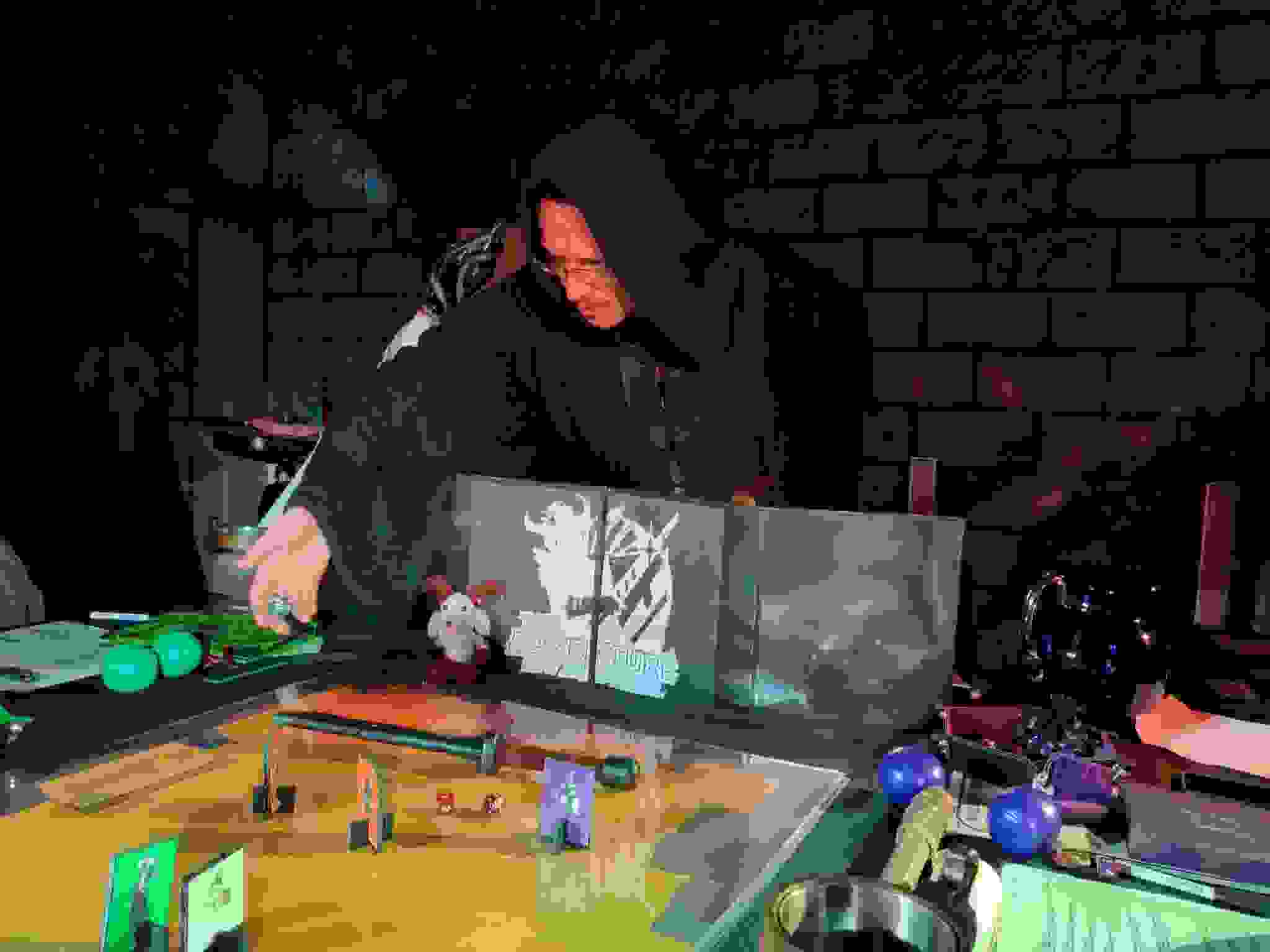 Having never entered the role-playing board game world before, I had no idea what we were going to be seeing, doing etc. All I kept thinking was it’d be like the games they play in Big Bang Theory. Whilst the game was different, my idea wasn’t too far off the mark. On arrival we were greeted by our host in full costume who escorted us to the private room. We encountered a set which looked like the basement of an old building. There were stone walls, paraphernalia lying around and an old smell.

We then each chose one of six characters to play and were decked out in that characters gear. I selected the wizard and was equipped with a green cape and staff. The outfits were great and really added to the immersive experience. Once seated at the table we were all given a game card that was special to our individual character. Being a wizard I had magic and a book of spells. As the game went on, it was cool how we were able to drink out of tankards, the gameplay was clear and we were all able to play our own specific roles.

I’ll caveat this straight away by saying I’ve never done anything like this before so my review will be based on my newbie impressions. This is a tabletop role-playing game, what I imagine Dungeons & Dragons to be like, with a little bit of escape room thrown in. It’s held in one room of a building in trendy Hackney Wick. Inside there’s mood lighting, audio facilities, costumes, stone walls and a large table full of game objects which all help to transport you into another world.

You each pick a character from a choice of six (wizard, soldier, orc, elf, dwarf or minstrel) who you immerse yourselves as. Each one has differing strengths, skills and weaponry available to help you in the game. Our games master was fantastic, feeding off our responses and keeping the story flowing seamlessly, no matter what we said. He controlled the lights and sounds as we progressed, keeping them in sync with the story.

It’s probably not fair to keep this category in, but as we have I’ll score it accordingly. When you play the game, you take it in turns but collectively work as a team. There are a few occasions where it’ll come to a riddle, a little escape room type game or a mini challenge, however as you’re in a big group you’ll miss out on these unless it’s your turn. That being said, as a newbie to role-playing games I did enjoy the story, the games masters dedication to the story and the twists and turns the game took, so I’m sure you’ll enjoy the game anyway.

There was little escape room in this, with us encountering only 1 puzzle and 3 riddles. The rest was decisions that we had to make based on the story and the skills and weapons our character had. The result of each choice is determined by the roll of a 20 sided dice. The higher the number, the better your character does. Conversely, a low number could mean you’re defeated and lose some of your life. Although there’s a lot of luck involved, you do need to think of all the options you have available based on the situation and resources you have, as well as the consequences and risks involved with each one, to try to make the right decision. This game is not suited if you’re only after escape room style puzzles.

I really enjoyed this experience. It may have helped being able to bring beers in as this really enabled us to loosen up and play our characters to the best of our ability. The gameplay was fun and created team work, and the games master was excellent at his delivery. I also loved that we got to dress up! Yes, I missed not playing a traditional escape room but it was nice to try something different. It was a shame that the end of our game was rushed as we were running out of time, but I’m sure experienced role players won’t have this issue.

I’ve never considered doing a role-playing board game before, but the fact it combined escape room elements piqued my interest. I did feel quite awkward to begin with as I didn’t really understand what to do and felt uncomfortable being in character. So I started off quiet, letting our more experienced guests do the talking. But once I got into it, helped by the drinks I brought along with me, I found myself really enjoying it. The 3 hours ended up flying by and I didn’t want it to finish!

It does help if all of your team fully immerse themselves into their roles, so pick the right people to play with. This is pretty geeky and more niche than escape rooms, so it won’t be for everyone. But if you’re a fan of board games and immersive experiences, and don’t mind unleashing your nerdy side, I recommend giving this a bash.

The price seems quite high but as you can play in groups of up to six, it’s quite cheap considering your game play is 3 hours. The Adventure is Real offers a great experience, with the theming and immersive gameplay being so strong. There’s also a real opportunity for the game to be expanded so you can make numerous visits which you can’t do in escape rooms. My advice for newbies wanting to try this is not to be scared to lose your inhibitions as this could prevent the fun of the game!

As a standalone price, £30-45 sounds quite a lot, but it’s for a mammoth 3 hour experience with your own experienced games master. It takes playing Dungeons & Dragons style games at home to another level, upping the immersiveness with sounds, lights and costumes, and taking you on a polished journey that allows everyone to play the game. They encourage you to bring your own food and drink to consume as you play, which helps keep the overall cost down. Tankard style cups are provided to drink from.

They have a second game called The Cradle of Dreams which follows on from the end of this one. The venue was very poorly signposted and I really struggled finding where to go. They need to add a sign on the door or at least include a photo of the entrance on their website directions page.

The trouble with normal Escape Room reviews on generic review sites is that first time guests review the concept rather than the room. Escape Goats invited us down to The Adventure Is Real, knowing that as escape room fans and immersive theatre producers/actors we would probably be more likely to be TAIR’s target audience and give them a little more of an insight into whether this experience was a good version of what it was purporting to be, rather than just ending up as a review of the concept.

Having a pre-organised tabletop RPG all set up with costumes, lighting effects, music and a talented and enthusiastic DM hosting the whole event, gently assisting you on learning the rules is actually a perfect sell to the D&D-curious with no time on their hands Londoner.

Whilst other ‘Dial-A-DM’ style experiences do exist, this is truly stand out in terms of its production quality. Even whilst it’s BYOB (great for keeping drinking costs down), the manner that your own drinks are presented to you with a flourish is a testament to what is to come, and will undoubtedly help lose some inhibitions; helpful, since you’re definitely going to get out what you put in. The world is pre-designed, but very fluid depending on your own actions. We tried throwing a curve ball straight away, which was accepted with glee, and led to an exciting excuse to push forward with further mechanics, introduced gradually throughout the evening.

The promised Escape Room aspects were a little lacking, though clearly of a higher standard than a standard D&D campaign, essentially comprising a few riddles and an excellent, well presented logic puzzle which some of us solved while others were dealing with time limited in-game disasters, which felt dramatic and exciting, despite leaving some players out of that aspect of the game.

This was an early test of the experience, which is likely to only improve as the DMs become more confident and experienced (though ours was clearly seasoned already). Certain aspects, like earning coins and collecting treasure were underused, since we never got an opportunity to spend them, but gave us some quick wins and enhanced the atmosphere since they were physical items to collect.

It is an attractive and well executed principle for those intrigued by seeing tabletop gaming in popular media who want to try it out for an evening in a non-committal way or even for seasoned D&Ders that want to play in a more professional and immersive environment, and with the promise of future campaigns (that could be added constantly), TAIR deserves to gain plenty of repeat guests.