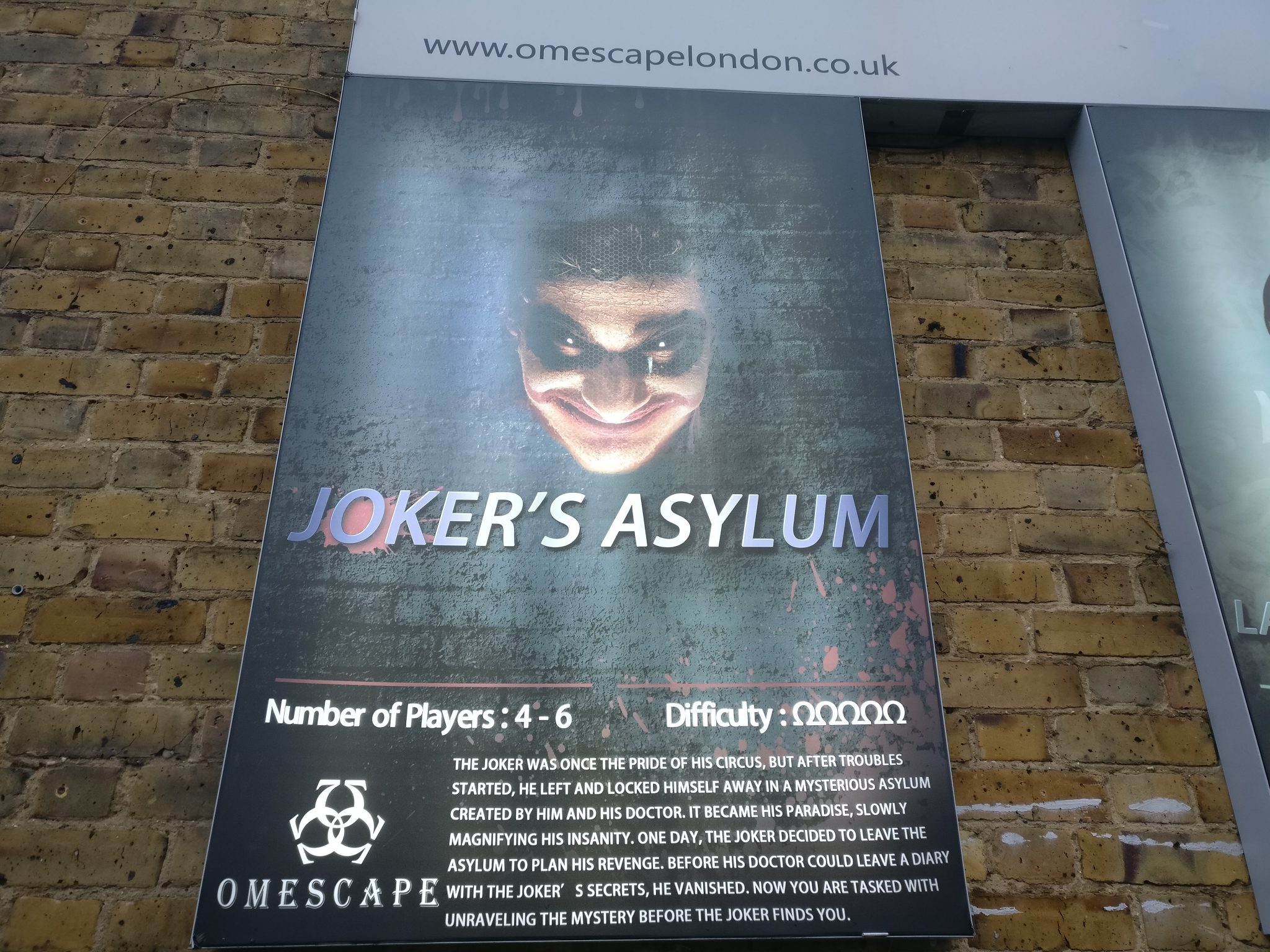 Synopsis:
The Joker was once the pride of his circus, but after troubles started, he left and locked himself away in a mysterious asylum created by him and his doctor. It became his paradise, slowly magnifying his insanity. One day, The Joker decided to leave the asylum to plan his revenge. Before his doctor could leave a diary with the Joker’s secrets, he vanished. Now you are tasked with unravelling the mystery before The Joker finds you.

Did we escape?
Yes, with over 3 minutes to spare but with quite a bit of help and so we didn’t feel like winners

Our reviews contain one unavoidable spoiler. If you don’t want to know it, go straight to the overall scores

6/10Whilst this game was technically fine, it wasn’t particularly interesting in any respect and featured a very Marmite feature in splitting the team up from the beginning and keeping the two halves apart for a considerable amount of time. It did the job but I wanted and expected more.

3/10At over £27 pp this room is priced too high for what you get. I feel the game had real potential with the initial twist and floor space, however, I felt cheated by the time I came out.

3/10This is a little pricey by London standards. You get a very large floor space, but that’s about the only positive. I spent quite a lot of the time with nothing to do and the puzzles aren’t that great. I just didn’t find this that enjoyable, which is something I very rarely feel about an escape room.

5/10There wasn’t much of an asylum vibe here and some of the things that we had to do didn’t really make much sense. The worst thing about the game though was that each room was extremely sparse, making the game feel very artificial.

4/10Other than the name of the game, I was a little unsure what the theming was meant to be. The puzzles were in line with an asylum in parts and the music did add to the intensity however the overall wall designs were lacking for me.

4/10The design probably looked pretty good when first launched, but the rooms and contents are looking quite tired now with a lot of wear and tear. There’s quite a bit of detail in the rooms and the puzzles linked to the theme pretty well.

5/10There was no ‘wow’ factor in this room. It had the office/study feel. The set seemed a bit boring. Everything ran logically though. The theming was also in line with the puzzles. The room is based on the early days of the joker in the Batman series. However, when in there, you forget that it is based on the Joker, I believe the story could have been improved and made more exciting. 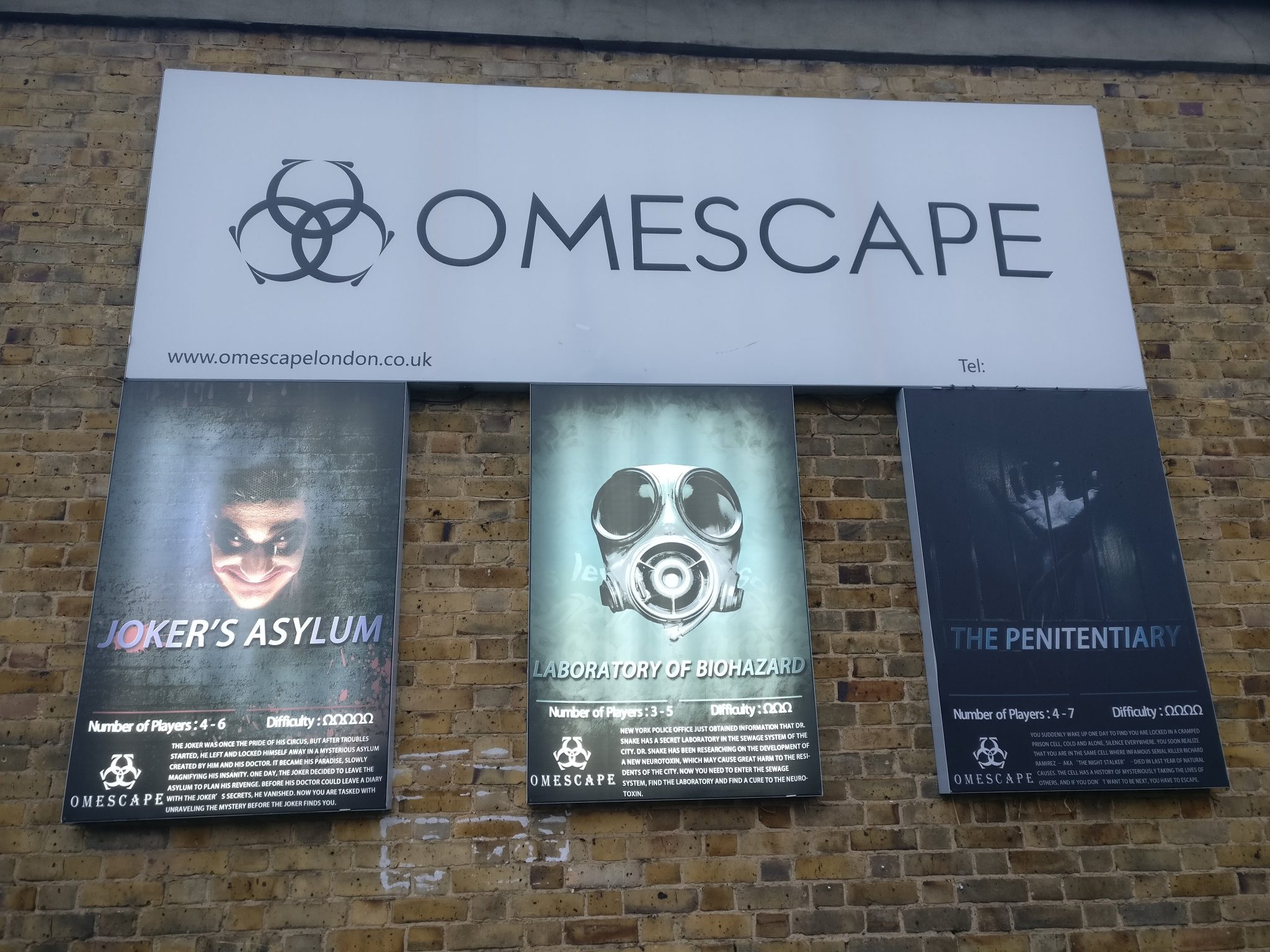 6/10Joker’s Asylum boasted the relatively fresh feature of splitting our group. This was an interesting element in concept but the activities weren’t evenly split between the two teams and, as a result, we felt unnecessary pressure knowing that we were preventing the others from progressing.

3/10The main uniqueness of this room is the ‘twist’, however even with this I. found the use of space, design and lack of puzzles poor.

3/10The secret way of traversing between rooms was a new idea for me, but everything else I’ve seen before and so didn’t excite me.

4/10The uniqueness I guess came through the twist at the start of the experience, but it is something that has been done before, so nothing too unique.

5/10There were definitely some cool puzzles at play here in the first half and everything seemed fair but once everyone was reunited, we realised that we just had one thing to do so it felt a little light and splitting the group was a way of drawing the game out beyond its natural limits.

4/10There seemed to be a lack of puzzles in this game, and when you were met with them some were really difficult to solve without the aid of a clue. Once the clue was given there was a logical thought there so I didn’t feel cheated. However, there was one element that goes against the escape room etiquette. One day I’ll legitimately break something as some companies add these in.

3/10They class this as their most difficult room. I didn’t get to play a lot of the puzzles (more on that later) but from what I did get to try, they were either pretty basic or were complicated and involved a lot of reading, which I don’t enjoy.

3/10In this escape room there is a twist at the start resulting in some people doing more puzzles. I have seen this done in other escape rooms and executed well, but in this room, there were times where I was waiting around as I had nothing to do. Communication is key to solving the puzzles. The links in solving puzzles seemed loose, however being a high difficulty level room, it justifies it. The room lacked skill games, it was all about logic. There was a bit of reading to do, which I’m not a big fan of in escape rooms, which lost the fun effect a bit. Also, when requesting clues, I felt the clues given were more like answers.

I liked the idea of splitting the team into two and the fact that some puzzles spanned that split.

I liked the ‘twist’ but not how it was delivered.

Ermm… Having to scrape the barrel a bit here… The size of the rooms as a whole was unusually large and the host was pleasant.

I’m always eager to try difficult rooms to test me and this room didn’t disappoint in that sense.

It had a vague theme, splitting the team was unbalanced and the actual space wasn’t exciting to explore.

I felt the lack of use of the big rooms was a waste. More puzzles were needed as there wasn’t much to do. I was also disappointed that our games master was running two rooms at a time!

We were split up into two groups for a large chunk of the game, but there was an uneven split of puzzles between the groups – my side had very little to do and so had to wait around bored until the other side completed their challenges. I feel that their experience was a lot better than mine. You needed to do too much reading for my liking. Communicating with the teams via walkie-talkie was quite clumsy and got annoying as you could only speak one at a time and anything that was said within the first 3 seconds wasn’t broadcast.

After finishing this room, I kind of had that feeling that I was glad it was over.