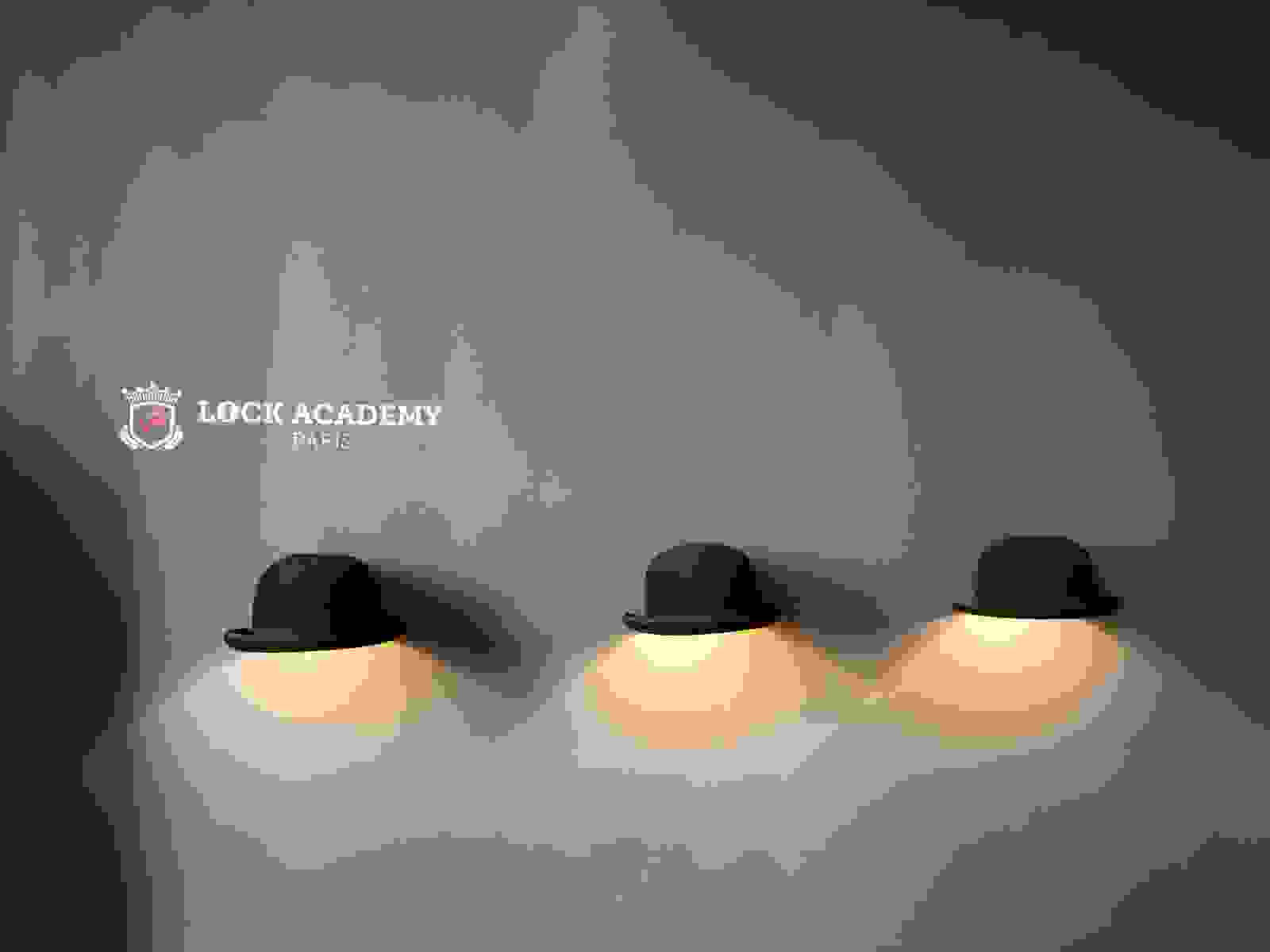 7/10I was severely underwhelmed by the first space, it’s a teenager’s bedroom. It felt authentic but also quite bare although this did reduce the probability of red herrings. That said, there were some cool interactions with this environment that were relevant to where we were. But then the second half of the game completely transforms and the calm build up in the first half is appreciated as it makes the later stages that much more impressive. It was clever too as the game also shifted in puzzle style which totally made sense considering what we were now facing.

8/10This company does the theming really well. From the moment you enter the reception, the theme of Professor Lock and the academy can be seen all around. Even the receptionist is in character with you – that’s even before you meet your GM. What’s nice about this company is that every game is linked to Professor Lock. We played Little Miss Lock, where we were recruited by the Professor to find his daughter. Our host met us and took us to the bedroom of Cher, the professors daughter. We had our briefing and then we were left to our own devices. What was great about this game is it was a tale of two halves. The first half’s theme was as you’d expect a typical girls room with trinkets, pictures, teddies etc lying around. All the decorations were about the Academy and linked to the theme. The second half goes from this nice room to a completely different setting. I don’t want to spoil the story but the design in the second room was epic, with an excellent twist!

8/10As you work through this escape room, you are immersed in a storyline, even though at times I did lose track of the storyline. The mix of light and dark was interesting in this room as well.

7/10As mentioned, there were some cool interactions with props in the bedroom set but this part of the game was predominately search based – there was a lot of hunting to do. I much preferred the second half where there was still a tiny bit of searching required but mostly observational and logic-based tasks.

8/10As discussed above, this room was a game of two halves. The first half involved the standard room puzzles where we had to hunt for various objects and keys. As you’ve probably read previously in our reviews we are awful at hunting and wasted a lot of time missing the obvious things. The puzzles were not particularly difficult, they made sense and had logic. Once we entered the second half the game changed which is why my score is higher, and this is where we managed to make up lost time. These puzzles were more logical with a higher difficulty for solving and we went through these at a much better pace. The second half was extremely tense with the music becoming more traumatic. The ending is pretty cool too.

8/10There are a lot of puzzles in this room, which involves a lot of searching, so you’ll be kept busy. What I liked about the puzzles is the use of technology and how they were integrated into the puzzles and the way the use of them makes sense in terms of the storyline.

8/10It was fun. Happy to admit that I was completely turned off by the bedroom set and then a bit disheartened by the number of search fails we were committing but the game is deceptive. If anything, I found the design of the entire game pretty clever. Reason is, we usually storm through a game without stopping to take in or appreciate the narrative. The slow-paced nature of the first half forced us to pay more attention to what was happening in the story than we usually would. So, by the time things kicked off in the final act, we knew exactly what we were doing and why which does sometimes get lost in the frenzy of other games. It also mostly dropped the story stuff in the later stages to allow you to focus on the mission at hand which was very welcome!

8/10I really enjoyed this game. The overall experience had a great beginning, middle and end. The twist in this room is really unexpected and makes this room so good. The tension you feel in the second half is something I’ve only ever really felt in horror rooms. Yes, the first half was basic but trust me you will not be disappointed playing this game. The hosts were also really friendly and understood our game, by knowing when we needed a nudge otherwise she left us on our own which we like.

8/10What stood out to me in this room was the twist in the middle which I wasn’t expecting. Also, the pressure at the end added to the tenseness of the finale.

8/10It’s a good game. The ‘reduced team penalty’ strikes again but I would exercise caution in bringing too many players into this one. Cap it out at four I reckon or you’ll start to tread on each other’s toes! All in all, this game wasn’t the most technologically impressive or the prettiest space to spend time in but it was wonderfully crafted and, ultimately, that’s the most important thing.

7/10As we played as a group of three this room was a little expensive, however like all the French rooms we have played, you are greeted with complimentary drinks and sweets on arrival. The rooms are really clean and well designed. I also like how all the games are linked to Professor Lock and The Academy. I look forward to going back and playing their other rooms.

8/10The hosts have put time and effort in this room and the storyline. When you walk in you start in a child’s bedroom, but things change. There is definite value in trying this room.