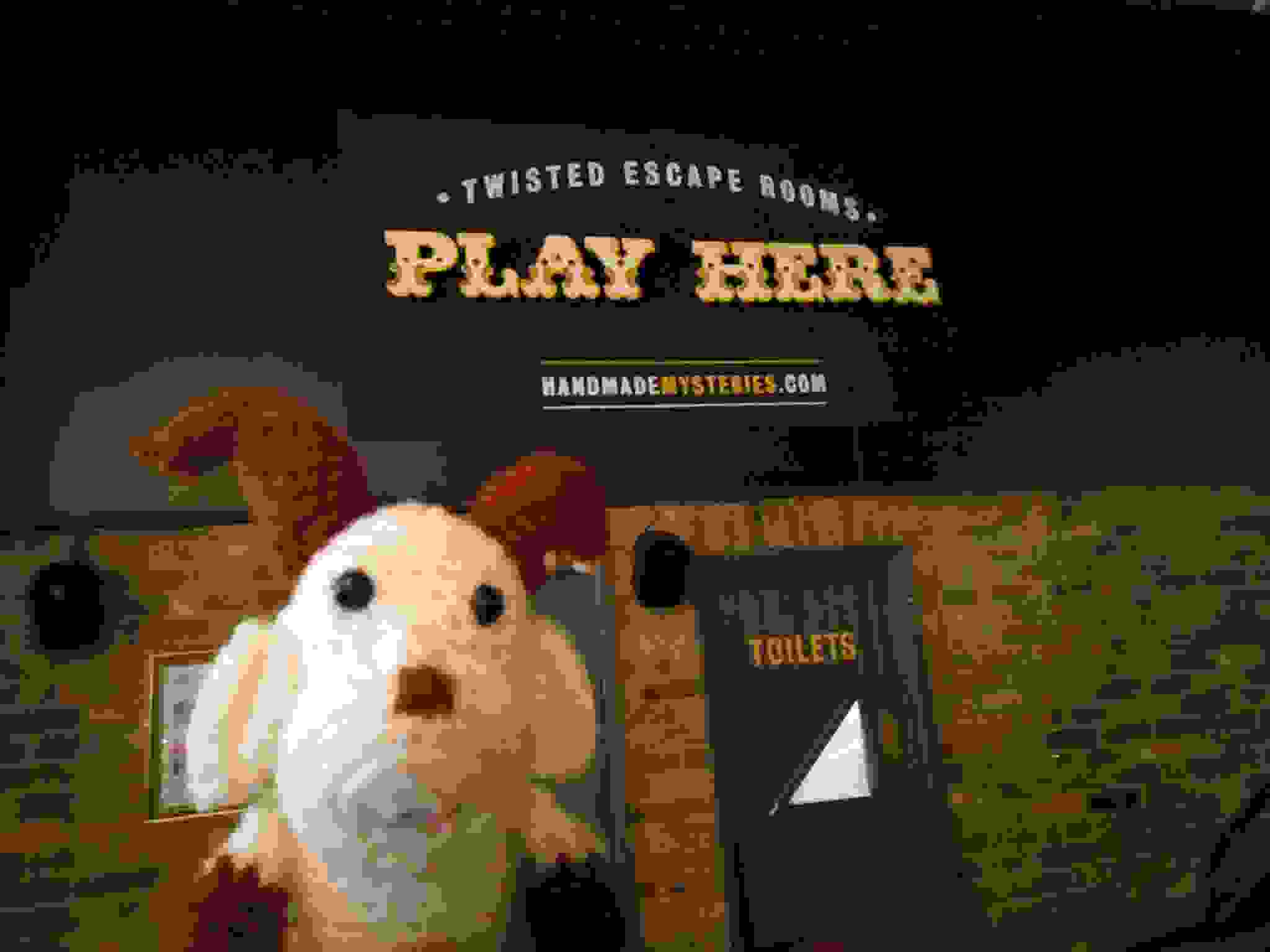 8/10One thing Handmade Mysteries do well is theming. From the moment you are met in the bar to the end of the game, the story remains strong. The room itself was well decorated to the theme of a toy shop with some added sinister parts. I liked how the clue system was delivered by the main character, and that all the puzzles were linked well to the story. Some areas of the rooms were a bit dirty and worn but for once I think it was intentional not through lazy design. I also thought it was a genius idea on how they used the host in the game.

7/10Our host was fully in character, dressed as an endearing but intellectually challenged wind-up toy soldier who’s come to life by his ‘poppa’, the toy maker. He added a fun aspect to the room, but did waffle on a bit too much during the pre-game intro. Plus he gave us help before we even began by telling us what is colour coded and why, which I felt a little cheated by. The theming of both the rooms and the puzzles was good, and there was a lot going on. However it all felt a bit run down. They may say it’s by design, but I feel it’s a lazy way of not having to fully maintain the room, especially with it being played by drunk pub-goers as it’s held above The Depot pub near Caledonian Road station.

5/10Whilst the puzzles were well themed to the room, I thought there were a few bad things with them. The main character delivers clues, however at times due to the loudness of the room it was hard to hear him. This room also had far too many padlocks! In fact I think every puzzle ended in a padlock. There was however a nice variety of games from logical to skill to observation. Also, having played this room with six people, there were several moments when people were stood around. This was due to the puzzles having to be solved in order. Lastly, the reason for my low score is due to the fact there is one puzzle that you need outside knowledge for. Whilst most people would be able to solve it, I feel a game should not be added without instructions/a guide.

7/10There’s a varied mix of puzzles and some inventive ideas. They need to be solved in a linear fashion, but because there’s tonnes of items in the large space, some of the team can explore to spot things that might be needed later. However there was one skill game that can take a while to complete and left the rest of us loitering around not doing much, which is a fun killer. You’ll need to do some reading and listening, but at times the background noises made it hard to hear. Knowledge of certain board games is needed to solve some puzzles. If you haven’t played them, it could really hinder you. Needing outside knowledge is a big no no for an escape room and this borders on the wrong side of it.

8/10This was one of the few times the goats invited friends to play with us. This at times hindered the game for me as I found myself standing back so they could enjoy the room. Although having your mates in a room does add to the enjoyment, particularly due to some of the elements in the game play. I also really liked the host and the added score card you get at the end. The other reason for my high score is that even though we smashed through it, I still found I got everything I needed from a room.

7/10This room is particularly suited for groups who want to make an evening of it as it’s situated above a nice pub with decent beer garden so you can drink before, after and even during the game if you want! I didn’t enjoy this as much as usual because there were 6 of us which meant I was often standing around aimlessly and I kept losing track of what was going on. This is not the rooms fault so I won’t mark it down because of that, but it reinforced my long-held belief that the optimum maximum team size for an escape room is 4. I particularly enjoyed the immersive theatre side to this room. It’s stated as 18+, but there wasn’t much adult content in here. Although I did have to look up somewhere, ermm, unusual!

7/10If you play this game, I’d highly recommend you play in group no bigger than 4 so that you all get to play the challenges, plus there will be limited standing around. Knowing this room is above a pub, they encourage you to drink. You can even take your beer into the room! That being said, an experienced gamer will fly through this as the puzzles aren’t too hard, so there may be better challenges out there for you!

7/10It lacks finesse, but that’s not necessarily a bad thing when it’s aimed at a pub audience. If you’re wanting an escape room that will challenge you but not take itself too seriously, then this is for you. We did escape too quickly in just 37 minutes, but I think that was mainly due to being in a large team of 6, instead of the usual 3-4. Compared to Handmade Mysteries’ other room Lady Chastity’s Reserve, the theming here isn’t as impressive, it’s tamer with an innuendo-free host and there wasn’t a prize for escaping in time. However this meant our host was more willing to help us and not leave us hopelessly stuck. Overall it was good, but it doesn’t compete against our favourite toy-themed room, Toys in Barcelona.