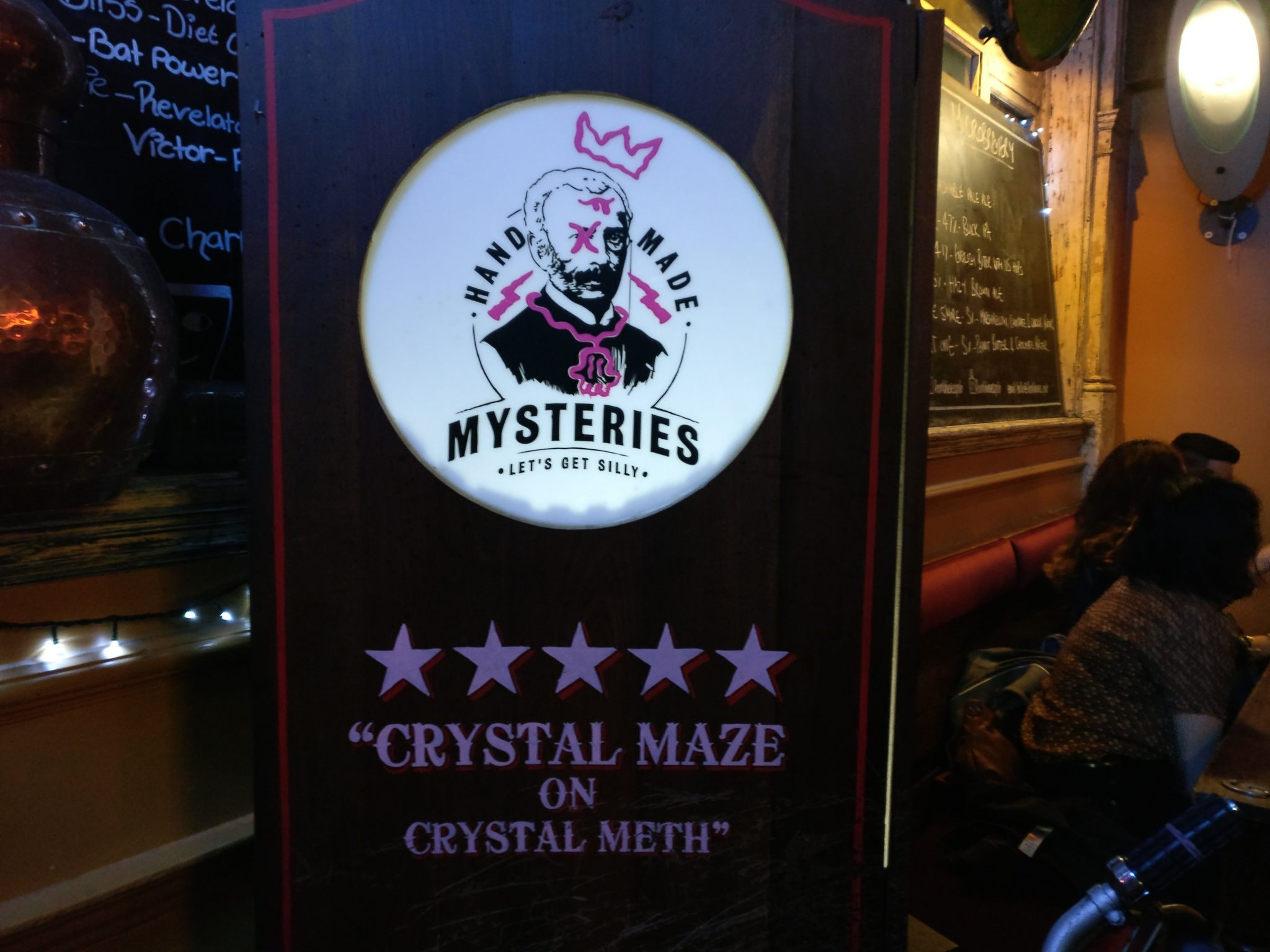 Synopsis:
Lady Chastity’s Reserve is an experience like no other, combining clues, comedy and immersive theatre. This fun fuelled team game takes place in the secret rooms of premium pub venues. Your host, Gabriel, will introduce you to the lair of the deranged Lady Chastity as you pit your wits against her mysterious belongings and strange contraptions. Those who prove themselves worthy will whoop their way through an hour of surreal gaming, leaving with Chastity’s fabled bottle of aphrodisiac wine.

Price at time of visit:
£27 per person for a group of 4 in peak time

Did we escape?
No, not even close!

7/10When we booked onto this, I thought £27 for a game in the upstairs room of a pub was pretty pricey. However, once you get in there, you lose any sense that corners have been cut. The room is intricately themed and the host was fantastic.

7/10Considering the room is above a pub don’t let this fool you. The room is well designed and the host is in character from the moment he meets you in the bar. The price is really good for the experience you get.

7/10It’s around the average price for a London escape room, but you get a well-themed room and the acting and wit from our host Jason was excellent.

6/10This escape room is in the mid price range for escape rooms. It’s worth a try due to the quirkiness of the room.

8/10The room was appropriately dingy and had a nice, atmospheric soundtrack backing it. I was honestly surprised that they let people loose on some of the props that they had in there. I’m equally amazed that nothing looked worse for wear!

7/10The game is yet another room however the attention to detail to the theme is well captured. The added effects of the music, the smells and Gabriel’s presence for the clue system was excellent. Unfortunately, as we played this game quite poorly we didn’t get to explore too much.

9/10This room was a lot better themed than I was expecting. The host brilliantly acted out a very detailed introduction at the beginning. The room had a great atmosphere with a good set, smokey air, tense music and humorous pre-recorded soundbites continuing the storyline and helping with our game. The games also linked well with the theme.

8/10You can tell the hosts have put effort into the theming and story. Even the games master stayed in character throughout. He added humour to the game, however the intro did go on for a bit too long. 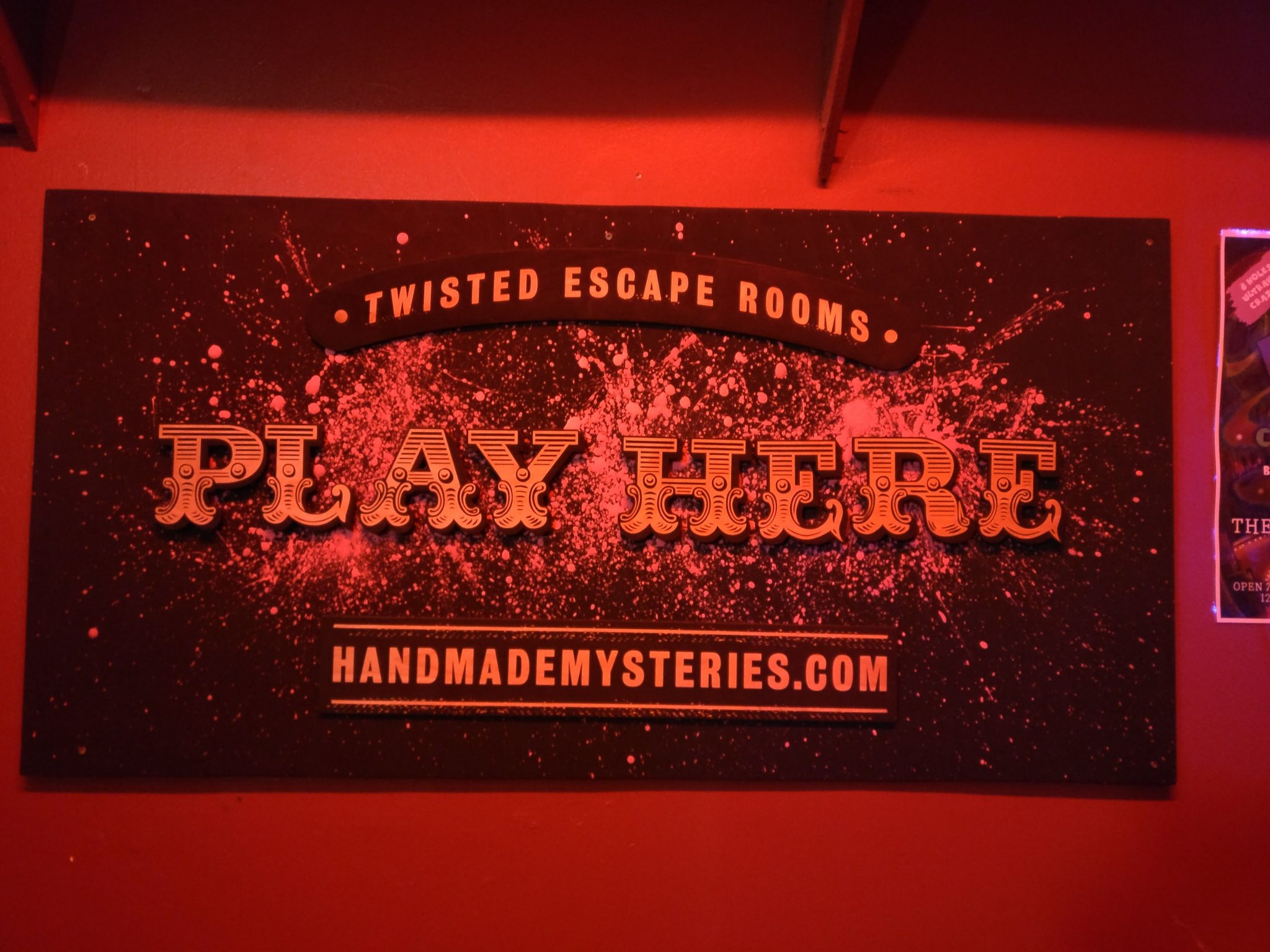 7/10This was a room that very much was all about the narrative and keeping everything on-theme. I might sound like a broken record by this point but this was a fully developed experience, not a bunch of puzzles chucked in a room. Everything that was present made a sort of sense in the universe of its story and that adds a lot.

7/10I found the addition of Gabriel and his acting added to the uniqueness of the room. The puzzles were different to other games I’ve played, and the overall experience felt new.

8/10This is another dimly lit room which I’m not the greatest fan of. However, the quality of the theming elevates this above the others. This is unusual in that you win a real prize – a bottle of wine – if you escape in time which gives you extra motivation to get out! It’s an adults-only room (there’s a bit of innuendo and sexual themes) which also helps it stand out from the crowd.

6/10There are adult themes in this room, mainly from the story itself. However they are on the light side.

7/10Oh dear, how do I rate this properly? We performed woefully in this room and it was no fault of the room itself, the puzzles were logical and even very straightforward, we just constantly missed all the pointers and I think were totally beyond help, we just had a bad day and weren’t getting out of here regardless of the number of clues we may have requested. The reason I point this out is that I reckon we only saw about half of what the game had to offer. So that’s the caveat. What I did experience was very clearly laid out, logical and fair. I assume the rest of the game followed that trend…

6/10Having struggled as a team in this room I would say the puzzles were tough however they were logical. We missed several hints and guidance given in the initial intro which damaged our game. Having only played a few I feel I’m not qualified to score these. However the musical puzzle was new.

5/10This was the worst we’ve ever played in an escape room. A lot of it was our fault, but some blame has to be placed on the room itself. Some of the answers/tasks were a bit ambiguous meaning we weren’t sure if we were doing the right thing or not and we wrongly erred on the side of caution. There didn’t seem to be a lot of things to do, just a small selection of tricky puzzles. I say ‘seem’ as we missed out quite a bit because we ran out of time!

6/10As we didn’t get that far in this one, it’s difficult to comment, but from what I did see, there is a lot of searching in this room, made harder as you start out in the dark. It’s quite a linear game and the puzzles are linked well with the theming and seemed logical.

Gabriel was a great character, I genuinely don’t think the game would be half as good as it was without him. I also appreciated the amount of effort that they’d gone to considering their location.

Gabriel was brilliant in this game and added to the whole experience. I also liked the set design and ambience of the room.

The theming and acting were the highlights of this room for me. It’s hosted inside a cool pub which has an epic games room so you can make a night of it and play some other games afterwards and have a few drinks (tip: you get brownie points if you take drinks with you into the escape room!) I loved that there was a real prize for teams that escape in time – I’ve always thought this would be a great idea and was surprised that no one was doing it.

The character of the games master and the humour that he provided was enjoyable.

We debated this afterward, we maybe should have been prodded in the right direction in a couple of instances – the game is very linear so it would be deathly obvious when people have missed something and gone wildly off-track. That said, in this instance, I really don’t think it would have altered our fate!

I think the only bad thing about this room was the way we played the game!

You spend a lot of the time in very low light with just a small torch to guide you which grates after a while. I wasn’t a massive fan of the puzzles as they didn’t flow for me and I found myself just wandering around aimlessly. We hit a roadblock when we didn’t open something as we thought we weren’t supposed to do it yet. It meant we wasted around 15 minutes trying to solve puzzles that were impossible to do without opening it. I feel that the host should have told us we could open it.

The games master I believe should have assisted more in pointing us in the right direction. We missed a big element of the game which would have helped us progress and he should have seen this early on.