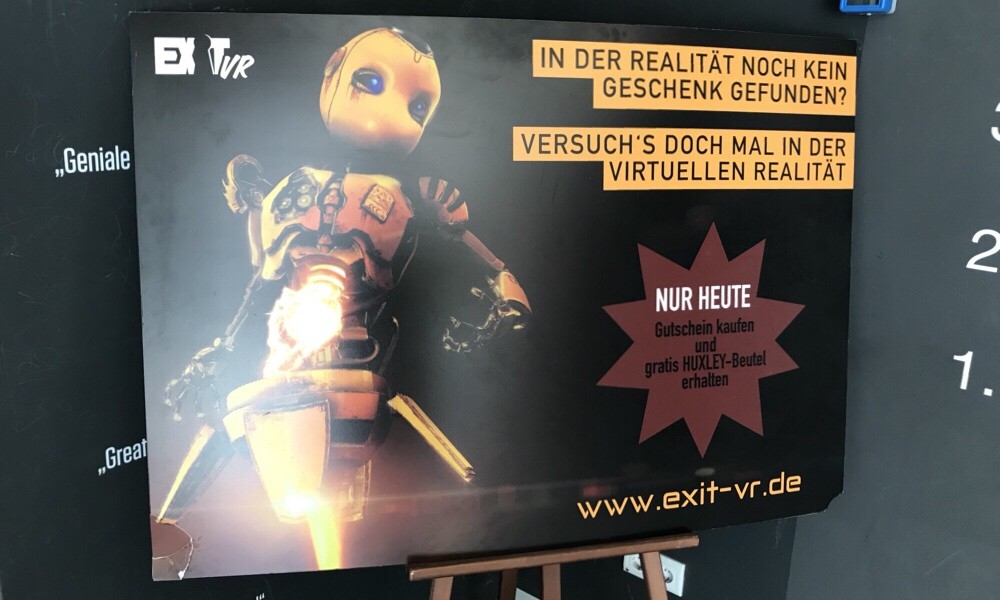 Synopsis:
In 1790 a team of researchers discovered mysterious matter in Antarctica.
They quickly realized that they could produce an infinite amount of energy with it.
A blessing. Or not?

8/10Double-edged sword, this one! It’s not a full hour game and it’s not ‘real’. However, cast your minds back to our last VR game and this was night and day, in a good way! The game uses the same tech as Mind Horror but allows for full motion – each player is suited up with a backpack carrying the computer (it is nowhere near as uncomfortable as it sounds!) and put in their own room where they have the freedom to walk around. Yeah, you explore this virtual space by physically walking around and exploring it, it’s great fun, incredibly immersive and worth the ticket price!

8/10Admitted that this is a high price for a room but considering the space you need for this, the tech used and the scenery on the walk to the experience through actual bunkers I feel it’s absolutely justified.

8/10It’s a bit difficult to give a solid answer here as the whole thing was virtual! That said, this game made a real effort of putting you into environments and situations that, mostly, aren’t really achievable in the real world. So you definitely have the sense that you’re exploring alien worlds and are playing something that a physical room couldn’t achieve. There were some subtle 4D effects at play here including the use of fans when riding on traveling platforms etc.

8/10As this game is VR, I often struggle on theming as I feel you have an advantage as you get to use computer technology. The quality of the graphics, the fact that you could walk around freely and also be able to use your hands to pick things up made the difference to me. I really liked how you could design your avatar and I did feel really immersed in the set. In particular I liked it when you got in the lift and asked your team mate to move over as you felt you’d bump into them, when in reality you’re in separate rooms!

8/10VR games are still a novelty and I think this game, by introducing the free-roaming element, offers something that commercially available VR doesn’t really allow – not without wires or a heap of extra kit! This felt worth paying for as opposed to Mind Horror which had few features that home VR couldn’t perform. It’s a very weird sensation to be walking around alien planets!

8/10Having only played one other VR escape room this is all I personally can compare it to so this comment is based on this. Compared to Mind Horror this experience is in another level. The quality of the graphics, the freedom to move and the general cleanliness of the room really stood out. Unlike Mind Horror you had the use of your hands to press buttons and pick things up. I also found it really unique that you played as a team which visually you could see in the game yet you’re in different rooms. The use of the microphones to talk to each other were great quality and I liked how immersive the set felt in terms of how you moved.

5/10Go for the experience rather than the gameplay I’d say! The majority of the puzzles were observation based and once you knew what the first area was demanding of you, it became very easy to apply that train of thought to the rest of the game… That’s not to say that they weren’t fun but any seasoned escaper would breeze through these puzzles in a physical room. I suspect that they’re probably simplified because the game wants you to focus on the entire experience and take in the scale of the world in front of you rather than just steam through puzzles.

6/10I personally feel VR rooms are all about the set you immerse yourself into. Making you believe you are in a different world is the pure focus, whilst the games were fun they still felt quite basic and not at all logical to the theme. The games were simple and easy to solve, some were more skilful than the others. In fact if I’m honest I preferred the bonus VR skill game we played after we escaped to the ones in the timed game. Whilst my score is low, this is a fun room and definitely worth a try.

It’s, for now, an extremely fresh experience and demonstrates the potential that VR escape rooms have. You will not have experienced anything close to this and, for that reason alone, it’s worth checking out.

For me the best thing about this game was the freedom to move about. I feel VR rooms have a long way to go to be on par with actual rooms but this experience is certainly on the path to excellence once the puzzles are a little tougher. It’s a must for all escape room/computer game fans!

Minor thing really but the battery needed changing halfway through the game – the system seems to operate a dual-battery system though so the game doesn’t cut out, the power just comes from the other battery as the swap is taking place. It does, however, mean that you have to stand still for half a minute or so as the games master physically swaps the battery on your backpack.

For me I would have liked a few more puzzles which kept to the theme and ones that were a little more complex.