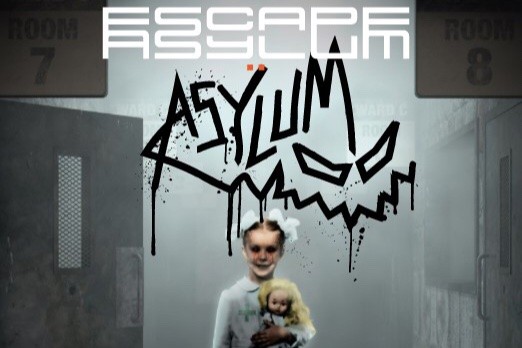 Synopsis:
You head to the Asylum. Built in 1914 it was open for 40 years until the tragic murder of Evelyn who was a young nurse working there at the time. All we know is she was killed by one of her co-workers! Her spirit traps you in after finding you and your friends trespassing! She will NOT let you out until you have solved her murder! Who knows if you are alone in there?

7/10It’s a game priced at exactly the right level, especially given the interaction provided by the host. The space isn’t the most interesting but the character of Evelyn adds so much to the experience.

6/10At £23 pp the room is average price. The host was brilliant and this company really shows passion and dedication to the rooms they have. You will definitely have a great experience with this one.

7/10The value in this room does not come from the aesthetics, instead it came from the games master, he added humour and scare factor to the game which made it more fun and interesting.

6/10It definitely gives the impression of being an abandoned asylum! That said, there aren’t many focal points in the room and it’s on the less expansive end of the scale. You’ll get probably exactly what you expect this location to look like.

6/10Whilst the room is literally a room in an Asylum with blood splattered white walls, where they lack in design they make up for with the interactive side by the use of talking to Evelyn’s spirit and the sombre music.

6/10Even though it’s a bog standard dirty white room,  the theming of this room comes from the storyline of Evelyn and the interaction that Evelyn brings.

7/10The game itself was pretty straight-forward, all pretty much taking place in one room and consisting of, really, just one massive puzzle that was made up of many little ones. The character of Evelyn was definitely this room’s unique selling point. You never physically encounter her but she is absolutely with you throughout the game and let’s just say that she doesn’t have a lot of patience!

9/10Whilst the theming was average, the added fear factor to talking to a spirit for clues and the occasional visit from people added to the whole experience. I’ve never had to do star jumps for a clue before! I absolutely loved the whole idea of this room.

8/10Evelyn’s spirit is what made it for me in this room and how it made it different from other rooms. When asking for a clue, Evelyn wouldn’t give it until we said “please”. Be prepared for foul language from Evelyn.

5/10Ultimately, there’s one overarching goal to this game – solve Evelyn’s murder. What I liked about this is that the game was solely focused on figuring this out, the puzzles felt way more entrenched into the story as a result. That said, there was nothing particularly standout about them and there’s a physical game to kick things off – something that I’m personally not a fan of.

5/10On entry to this room you are met with a skill game to open the door. This was tricky in the dark but we got through quickly. This game is lacking in puzzles and essentially there is only one to solve. However to solve it you have the usual hunting element for clues. This is a real brain workout but with the aid of Evelyn you can see the logic to escape the room.

4/10The puzzles themselves were bog standard, nothing too out of the ordinary and not too many of them. A lot of searching is required. A lack of light was used at times to add difficulty.

It was fun, through and through. Evelyn was a brilliantly acerbic character and the host did a fantastic job playing her. The way that the puzzles and goal were tied into the story really elevated this game, making for a well-rounded experience.

I loved this room, the added creepy factor of talking to Evelyn, the music and the smells in the room just made this a great experience.

Evelyn’s spirit is what made this room fun.

Physical puzzles, really don’t like them! Especially this one that seemed at odds with the theme of the game and definitely didn’t suit the location.

I feel there could have been more puzzles and a bit more theming.

The aesthetics could have been improved in this game and maybe a bit less searching required.