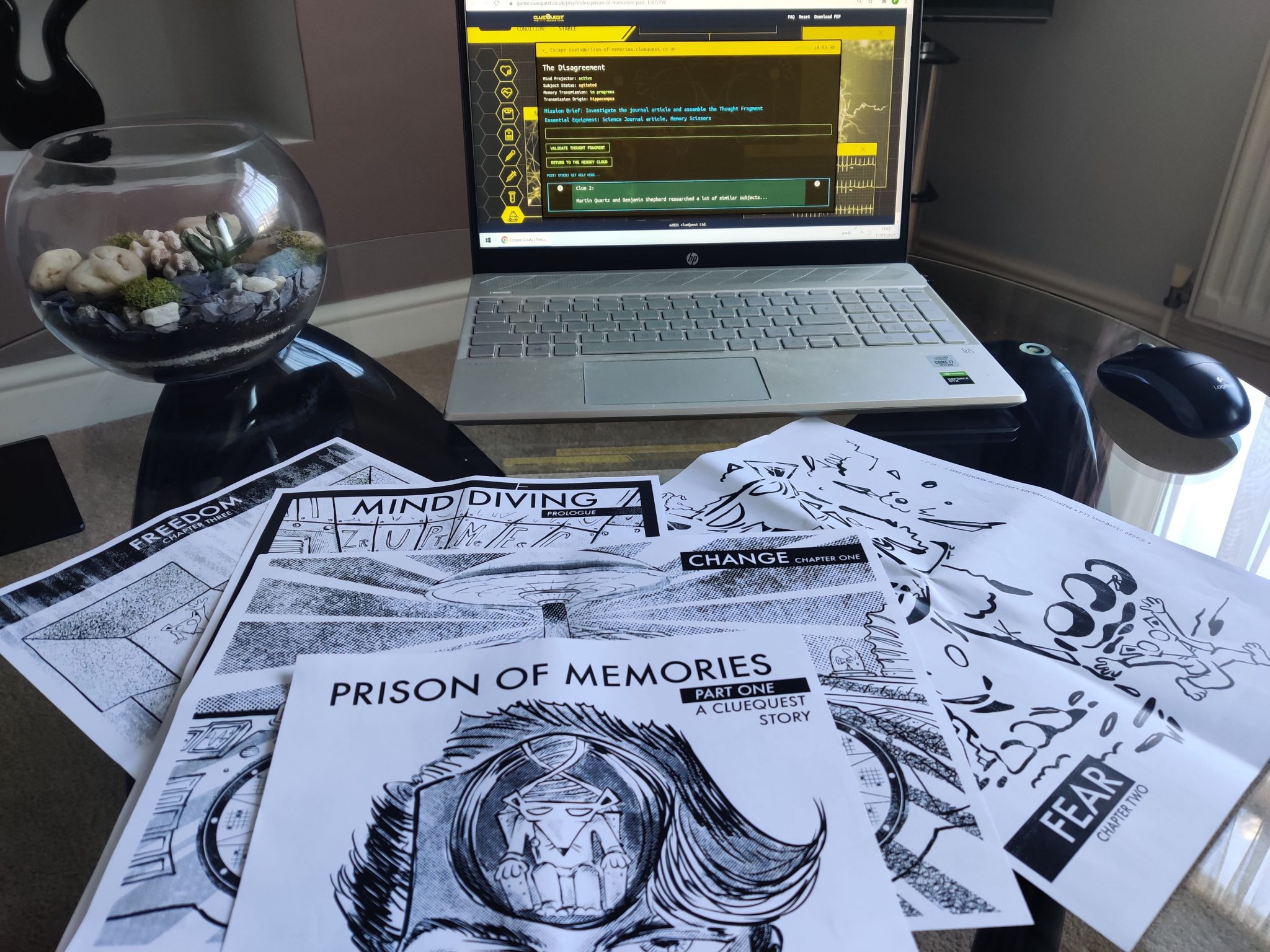 ClueQuest always stand out for theming when I’ve played their rooms in person as Mr Q is a strong presence and the themes for each game are always clearly noticeable. For me, I found it really hard to be immersed into the story as I was so worried about all the little pieces I’d cut out. My focus was more on the cut outs than the story. Whilst this was a personal flaw and not the games fault, it did deter my attention to the theming. The little videos we watched brought me back for each stage of the game, but once the play of that section started I was back to rummaging through paper. I feel this game would have been better suited to an online all virtual game to back up the good theming they attempted.

This play at home game is distinctly ClueQuest with its elaborate black and white artwork style, cuttable puzzles, nifty online portal, quirky videos, and mouthful of a name! The story involves their usual characters, like their trademark mouse Mr Q. You don’t need to have played their previous Print+Cut+Escape games before playing Prison of Memories though. The lack of colour saves on printing costs, but the vibrancy is missed. However you can pay extra to have a colour version posted to you. We played over Zoom, with each location needing to print and cut the PDF separately. You have to print all 24 pages. Initially I printed just the sheets that required cutting but was unable to solve the puzzles! 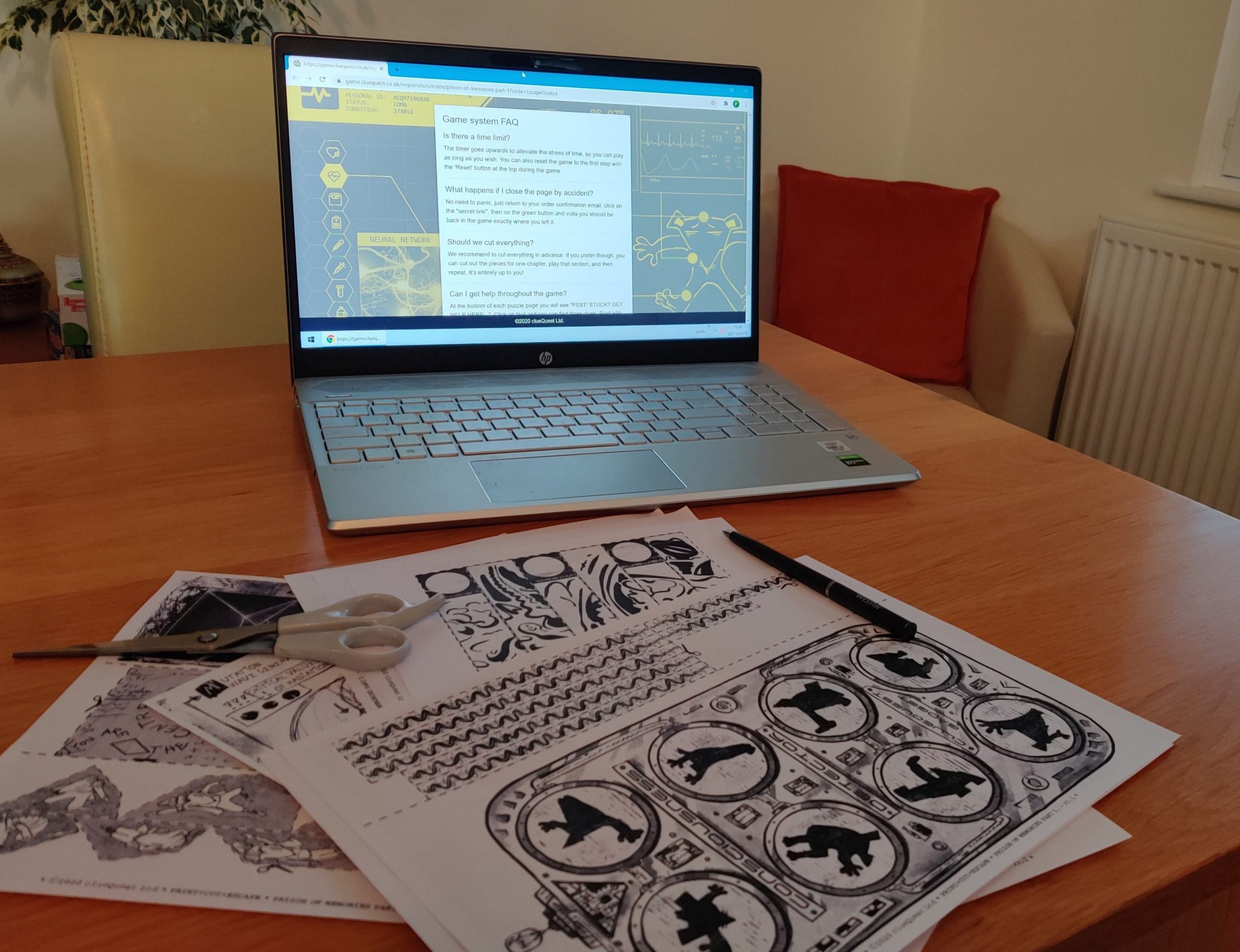 It’s been a few months since I’ve played a game but the challenges we faced in this one were above me. I found this so hard to play and follow even with the hints. The game is split up into three stages, the first one taking us what felt like hours. Whilst I understood the task at hand, with all the loose papers and the questions provided by the website nothing stood out.

There was one particular puzzle where you had to match cells to spell out a word. Even after we had the answer courtesy of a clue, we all still tried for another fifteen minutes or so to try and work out the logic. Once we’d mastered stage one, we actually started to get on a roll. The games in stages 2 and 3 were clearer, and I don’t think we needed a hint either. Whilst I really enjoyed the last two stages, I feel the difficulty of part one hinders my score.

ClueQuest have designated this as their most challenging play at home game yet, and I would agree! It’s split up into 4 sections – a prologue followed by 3 chapters. They require a keen eye, a sharp mind and a bit of dexterity. The first 2 parts were the hardest for me, with a couple of puzzles that had a bit of ambiguity to them so it wasn’t obvious if we had the correct answer.

We struggled to get going, needing a few clues. These were easy to access via the online portal, with 3 levels of clues for each puzzle. However the hints for one puzzle lacked a crucial piece of information. We had to take the final clue which gave us the solution, then work out for ourselves why that was the answer. Everything else though worked perfectly – this is a clever and well designed game, if you can handle the challenge. 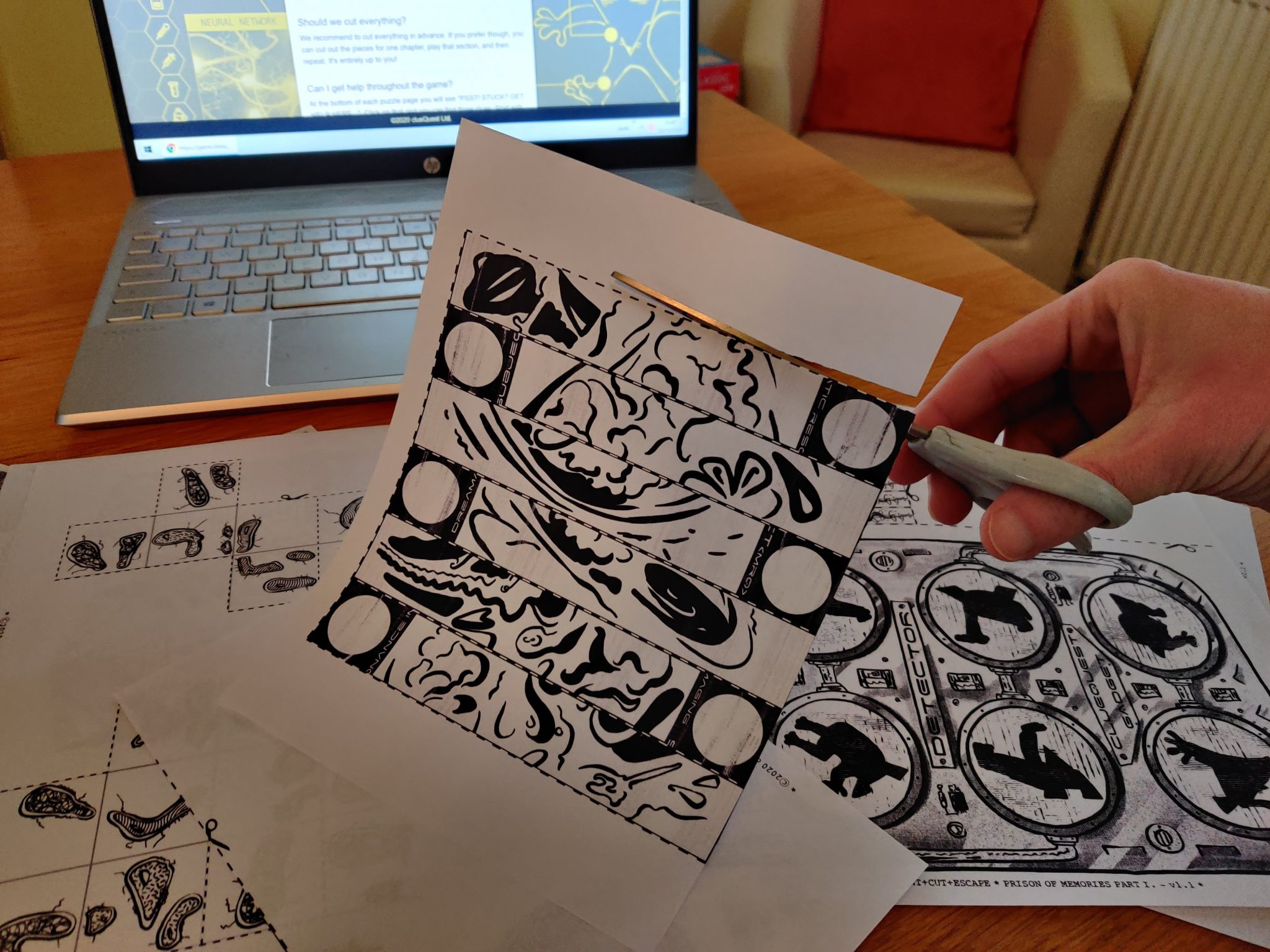 Whilst it was fun to play in a group on a Zoom call, it was quite frustrating as we’d end up in our own worlds trying to solve the puzzles and that prevented me at points seeing the logic on the game and it also took me away from the story. I feel to get the most out of this game it should be played in the same household to keep the fun levels up. It didn’t help that we took so long on part 1, as our energy levels were quite drained by the later stages. I’d advise if you play this game that you work on a big space to avoid losing the pieces!

We had a slow start, struggling with the first few tasks. This was from a combination of being very tough and the ambiguities mentioned earlier. It took us about 2 hours to complete the prologue and chapter 1. But from chapter 2 onwards, things started flowing nicely and I really enjoyed it. It took us about an hour to finish chapters 2 and 3. I like that they’ve incorporated an online portal into the game so you have digital tasks to perform along with the paper ones. Plus I like that it records your overall time taken. A small annoyance is the lack of page numbers which makes it harder to reorder the papers if they get mixed up. Plus some might find the cutting aspect a bit of a chore. 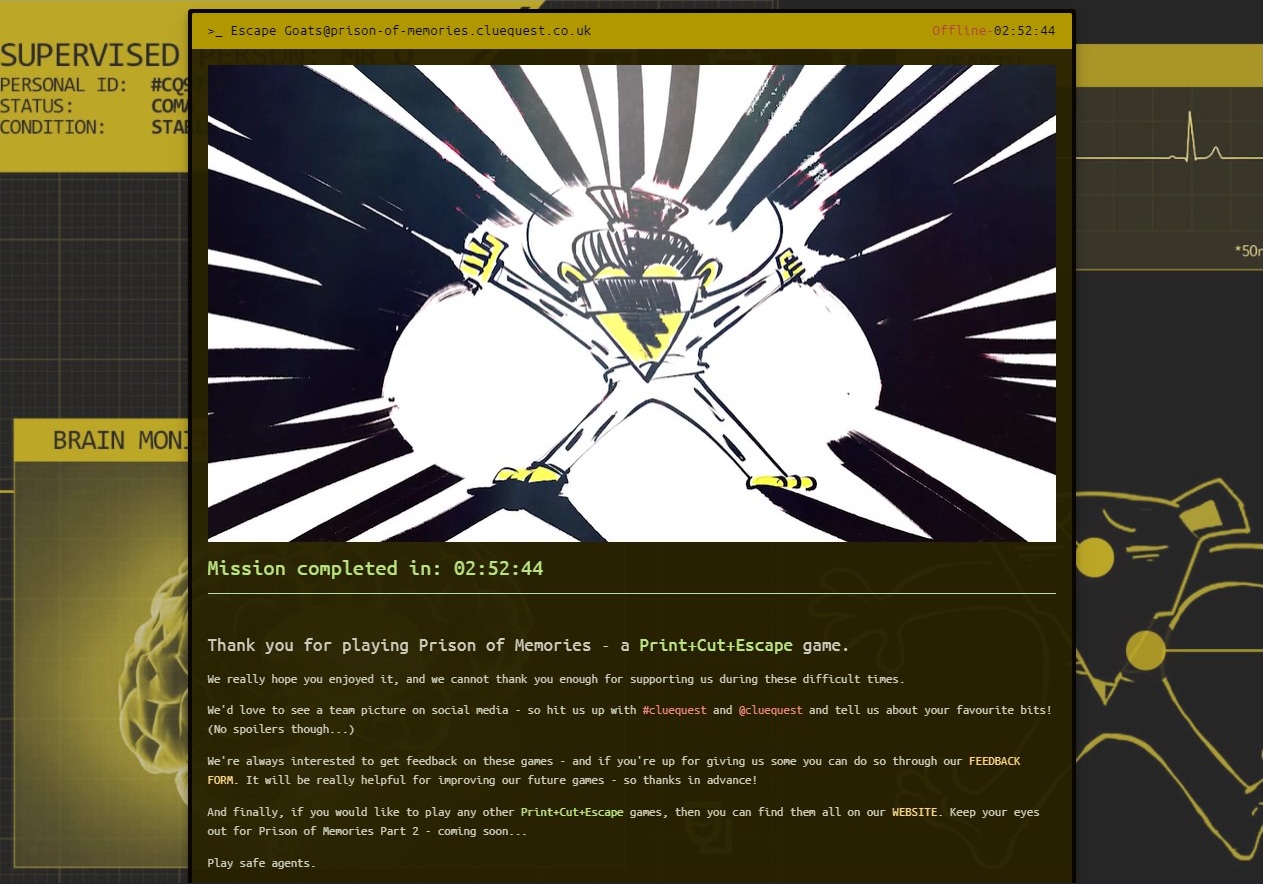 For £15, this seems a little expensive as you have to create a lot of the game yourself from the PDF provided. Yes, there’s an option to get the game printed for you, but for me the additional £10 seems a bit steep. I also found as the game was automated with answers as opposed to a normal host in a room, that some of the clues were not suited to the stage we were in. Whilst I haven’t played a lot of online games, I am aware there are plenty available at half the price without having to cut anything. That being said, if we were all in the same household I may have been more impressed with the game and think it was good value.

£15 gets you 9 detailed and unique logic puzzles, as well as an online platform consisting of digital extensions to the paper puzzles, and storytelling videos that punctuate the chapters. The price is a little high, but you get 2 hours worth of content as well as the digital features. However you also need to factor in the cost of printing it yourself, or the additional £10 to have a colour version sent to you. Due to the difficulty level, Prison of Memories is best suited to those who have prior experience with these sort of games. ClueQuest are churning out the print at home games, with 7 available at time of writing. So if this one sounds good but too tricky, try one of their easier offerings instead.